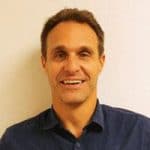 by Gino Sesto, Founder of DASH TWO, a Digital and Outdoor Advertising Agency based out of Culver City, CA.

It only seemed appropriate that Emmy Rossum, the star of the new Peacock series about billboard diva Angelyne, announced on Instagram that the famed blonde had joined the upcoming production as an executive producer.

Angelyne rose to fame in Los Angeles for appearing on a slew of billboards in the mid-1980s that showed her posed seductively on her signature pink Corvette. She became a cult figure and woman of mystery, with most of the details of her life, including her real name, remaining under wraps until a Hollywood Reporter investigation revealed them in 2017.

Instagram is, thus, the perfect medium for her to live on in the 2020s. She was famous for being famous decades before subsequent stars like Paris Hiltons and Kim Kardashians posted their first selfies. She’s now become an Insta-sensation, with people around LA posting pictures when they see her pink Corvette (yep, she still drives one) or a board with her on it.

Angelyne, asked in the Peacock show’s trailer what she is advertising, replies, “Myself.” Everyone on Instagram could offer the same answer.

Instagram has a short history, launching in 2010, but its roots in OOH have already grown long. It’s gained an amazing amount of traction — Nielsen found that a quarter of all Instagram users have posted photos of billboards to the social network. Here’s a look at some of the most notable moments in out of home-Instagram history.

2012: #TheConanBlimp Takes to the Sky

In the early days of Instagram, advertisers were just realizing the potential for creating viral opportunities. TBS created a branded blimp for talk show host Conan O’Brien and sent it across the country, encouraging people to post to Instagram using #TheConanBlimp. The network said more people checked in with the blimp than several landmarks combined, including the Statue of Liberty.

Out of home displays that have a digital aspect can increase engagement. That’s what Jimmy Dean found with a campaign that generated #SunPowered GIFs — powered by solar energy and created by a kinetic sculpture.

The enticement? The sausage-maker promised to award lucky winners a month’s supply of Jimmy Dean frozen entrees to one person who shared a “solar selfie” of themselves on Instagram (and other social networks). It was the perfect example of IG-OOH synergy.

Instead of rolling out a social media post or buying ad time on television, Guns ‘N Roses chose a different way to announce its long-anticipated reunion with original lead singer Axl Rose. The band posted the news on digital billboards, photos of which were immediately snapped and shared across Instagram. The brilliant strategy brought way more publicity to the tour and much greater reach for the boards.

It also proved something we’ve seen firsthand over and over again—Instagram is the perfect venue for musical artists and acts to advertise.

2016: Ryan Reynolds Turns a Billboard Into a Love Note

Actor Ryan Reynolds has more than 38 million followers on Instagram, so what better platform to promote his movies? But instead of posting a trailer — boring, been there — Reynolds did something cleverer for the first Deadpool movie. He took a picture of a far-away Deadpool billboard and shaped his DP costume-clad hands like a heart around the billboard.

It was the only board that advertised the movie, a classic superhero action film, as a love story, and it played on a Valentine’s Day release. The post received more than 112,000 likes. The caption read, “In 32 days, let’s cuddle the shit out of each other. #Deadpool.”

Enticing people to your location with the sole intent of getting them to photograph your artwork is a flex move. Gucci recognized the inherent beauty of the photos for its campaign for the Bloom fragrance. The objective: Encourage people to put pictures of the gorgeous wall on Instagram, spreading the Gucci message.

Since its initial launch in New York City four years ago, the Gucci wall has been reproduced worldwide, including in London and Hong Kong. Various artists have contributed additional work, too, and the hashtag #GucciArtWall has nearly 12,000 posts.

Spotify’s subway takeover featuring images of the beloved artist David Bowie, who died in 2016, and artwork inspired by his greatness reflected remarkable attention to detail and dedication to artistic perspective. The pieces appeared in unexpected ways, such as across subway beams.

The gorgeous works were a shameless appeal to Instagram users, who did not disappoint. The #DavidBowieIsHere hashtag paired with the campaign inspired thousands of posts on the social network, and to further entice them, Spotify offered a code to engage people on its platform. It also outright asked passersby to post pictures — nothing wrong with asking for what you really want.

The same year as the David Bowie stunt, Burberry came up with an idea that made international headlines. The fashion company — yes, there’s a reason so many of the cool campaigns come from fashion, they know how to visualize — pulled off one of the most stunning OOH transformations in recent memory.

To introduce its newest look, Burberry Saville x Riccardo Tisci Monogram, the company coordinated large-scale deployments of the pattern across Hong Kong, Shanghai, New York and other cities. The pattern turned up in the unlikeliest of places: on cable cars, on beach umbrellas, and even wrapping the entirety of Burberry headquarters in Seoul, South Korea.

Instagram users around the world shared photos of the fantastic marketing opportunities, increasing the number of people exposed to the campaign. Perhaps the most Instagram-worthy snap? That of a giant teddy bear in Monogram in Shanghai. It was unavoidable, and completely adorable.

Instagram rewards clever campaigns with outstanding brand value. So when Tweed, a cannabis company, bowed a fun idea at Toronto’s Field Trip Music Festival, it immediately became a viral hit in Canada, where the company rose to the most-recognized cannabis brand based on the wide spread of the campaign through social media.

Tweed posted outdoor art installations with one word (“hi” — the phonetic double meaning being obvious). Concertgoers took selfies standing in front of the sign and posted them on Instagram, where they caused a sensation.

Creating an out of home experience or billboard special enough to be shared by so many people is challenging, but we’re up for it. Contact us to learn more about our OOH and social media advertising opportunities.

Help us Help You ⇒Subscribe to OOH Today

It’s the Final Two Days —GET IN NOW! —The OOH Media Plan Awards