This April 25 marks 100 days of one of the worst ecological disasters in Peru, since Repsol spilled nearly 12,000 barrels of oil into the Peruvian sea.

Far from having solved the problem, the company continues to accumulate fines and sanctioning processes for non-compliance with its cleaning tasks and continues to issue statements in which it claims to have exceeded 95% of the work in the affected areas, a figure that is denied by fishermen handicrafts from Pasamayo.

The ravages of the oil spill will be felt in our sea for more than a decade, as shown by international experiences. That is why Oceana Peru promotes the campaign “The news happens. The disaster remains.” Developed pro-bono by Planta agency, the campaign aims to keep the demands on REPSOL current and mobilize citizens and the media to prioritize the issue on their agenda. 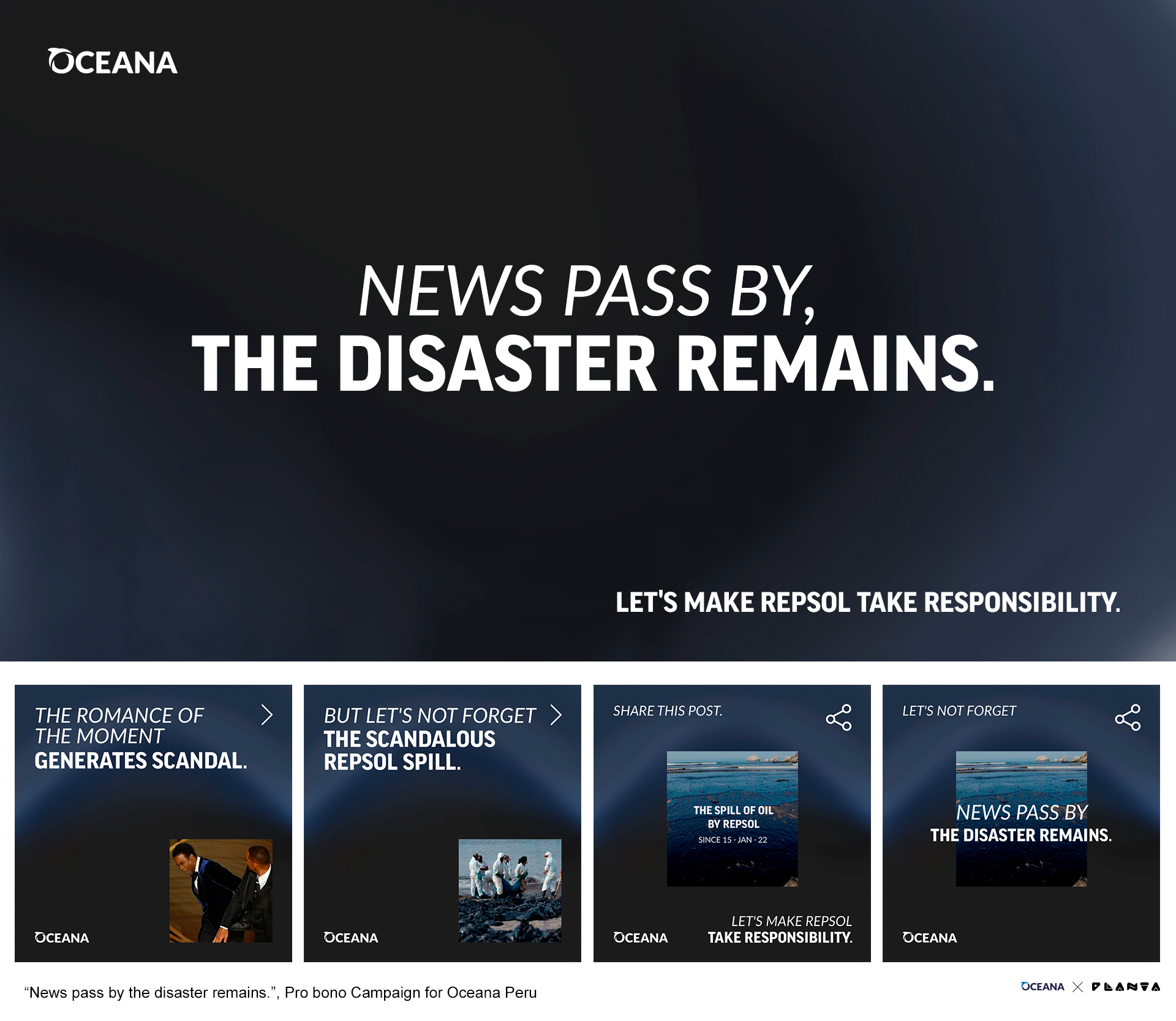 The State’s response to this reality has not been efficient. Even though the OEFA, SERNAMP and OSINERGMIN have imposed, together, more than a dozen fines that exceed 78 million soles, REPSOL does not show major efforts to really remedy the damage caused. And, although justice must guarantee that the company complies with its sanctions, the enforceability of administrative fines could be a challenge. Even with the collection of fines, the collection for this concept would not be destined to address the environmental consequences; would go to the public treasury.

“We invite the media, influencers and opinion leaders to join the campaign by sharing the information in our publications in order to continue exerting pressure on our authorities and on REPSOL, so that this ecological crime does not go unpunished,” says Daniel Olivares, CEO of Oceana in Peru. “We must ensure that there are concrete actions so that these disasters never happen again. We call on the Congress of the Republic to stop the advance of the hydrocarbon industry until there is an assessment of environmental damage and promote an energy renewal plan towards more ecologically friendly sources.”

“It is an honor to be able to support the Oceana Peru team to continue with this claim from the advertising industry it is important to take action in the climate crisis by putting all the talent of the industry to build more aware brands and consumers. The damage to the environment caused by the oil spill is irreparable, we all suffer it, the environment, the people who are part of the target of any brand. Without planet, there are no consumers,” explains GiGi Gutierrez, EDC & Planta Founder.

Planta is a triple impact agency with double B corp certification for its administrations in the US and Chile. Within its purpose, it makes a percentage of its pro bono time available to organizations that require the talent of front-line publicists for the causes that cross its purpose.