Continuing the theme on Outdoor Advertising formats and basics.

While Digital is taking over the OOH Industry creating tremendous growth in revenues, there is still, arguably, nothing like neon. Neon has been around Outdoor Advertising since the 1920’s. Though not nearly as popular as years ago, neon is still used on billboards.  In under a century, neon signs—part sculpture, part lighting, part billboard—have gone from marketing tool to tacky trash to folk art and still hanging around on billboards.

Neon is the first electric signage.  Typically found as a stand alone sign, when added to larger than life billboards, the impact of combining neon to a 14′ x 48′ sized bulletin can be breathless mastery to its space both day and especially night.

Neon signs are electric signs lighted by long luminous gas-discharge tubes that contain rarefied neon or other gases. They are the most common use for neon lighting, which was first demonstrated in a modern form in December 1910 by Georges Claude at the Paris Motor Show. While they are used worldwide, neon signs were popular in the United States from about 1920–1960. The installations in Times Square, many originally designed by Douglas Leigh, were famed, and there were nearly 2,000 small shops producing neon signs by 1940

If you have neon on your Outdoor units and would like us to share, please send photos to BillBoard@OOHtoday.com

I cannot verify if the two neon billboards below are still on the street. The Anti Gun message from 2009 in Boston and Yahoo in San Francisco. 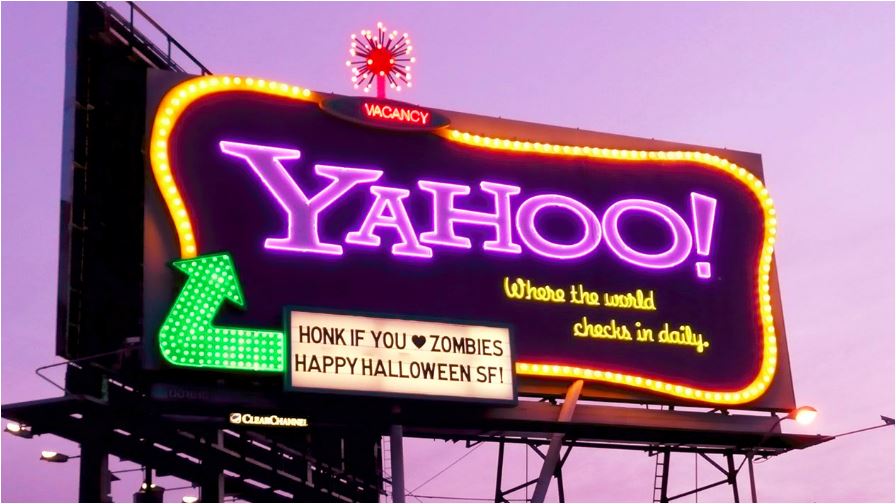 The Best Kind of Advertising

93% of Marketers Say OOH Is a Branding Essential