Digital Billboards at Stake in Indianapolis

Sounds fair enough and is not an uncommon agreement found in several municipalities throughout the country. Indianapolis Mayor Joe Hogsett’s administration has forwarded such a compromising plan.  The Metropolitan Development Commission approved it unanimously Dec. 5.  The Indianapolis City-County Council is next to weigh in on the issue.

The municipality hopes to mitigate risk of law suit by the #OOH Companies and in return seeing fewer billboards in neighborhoods than are currently in place. The typical opposing sides are in place, neighborhood leaders verses OOH companies. Very positive for the OOH Owners, is the city administration is seeking compromise.  So where is the rub? 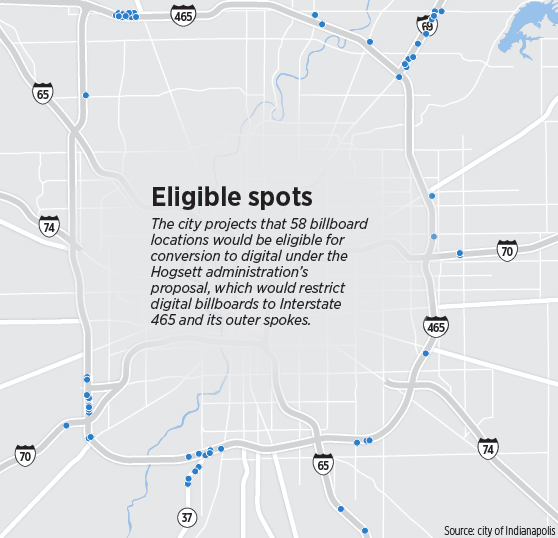 The anti-billboard people are assuming their typical position but the billboard companies may be shooting themselves in the foot. According to the IBJ, apparently the initial plan was for a 2 for 1 trade out.  That is 2 static billboards come down for 1 digital to replace or be built.  Then a new proposal came forward which is a 4 to 1 ratio.  Some would argue that’s too much. According to the IBJ, that is what Daniel McClendon, Fairway Outdoor Advertising‘s Real Estate Manger for Indianapolis, is saying.

McClendon is quoted, “The state of the ordinance as it is now, as restrictive as it is, is as far as we as an industry are willing to go to participate in this voluntary program.” The proposal’s restrictions on digital billboard locations are too tight, according to McClendon per IBJ.

adult entertainment establishments are being treated better than billboards

McClendon goes on to say, “We are being pushed into the very narrow confines of select areas,” he told MDC members at the Dec. 5 meeting. “I would venture to guess adult entertainment establishments are being treated better than billboards in where they are allowed to be located.”  “The further this goes from its current version, the further we get away from being willing to take down structures and see the billboards come down in the neighborhoods,” McClendon said.

OOH Today is of the opinion mentioning billboards and adult entertainment establishments in the same breath was not the best choice of words, though one has to admire McClendon’s moxie of standing his ground.  2 to 1 verses a 4 to 1 ratio?  What are your thoughts? Agree with Fairway’s McClendon?

‘Pigs get get fat and hogs get slaughtered.’

Being a native Hoosier, I spent my very early years on an Indiana farm, then after moving to the city, I would return to visit. We played a lot of horse shoes at family gatherings.  I recall a saying from my Uncle Jim, when one of us sets a leaner on the stake, with a final throw remaining, which could knock out our own points, it was smart to throw the shoe down so as not to loose points trying to go for more.
Uncle Jim would remind me; ‘Pigs get get fat and hogs get slaughtered.’

How Geo-Zoned Radio Advertising Poses a Threat to OOH Revenues