The New Chairman —Getting Netflixed

The Five Satins “In the Still of the Night” doesn’t just open and close the film, it’s woven through out. And gangsta and a little dollop of doo-wop go together like pastrami and rye. As someone on YouTube “In the Still of the Night” video comments: “When you start “The Irishman”, you realize how amazing this film is gonna be, partly because of this song. When you end “The Irishman”, you know how amazing this film was, as this song that started it all plays and fills your ears with amazement.

In case you couldn’t guess, I just finished watching “the Irishman”.  All I can say, if you haven’t seen it, run, don’t walk.  In my humble opinion, it’s an incredible piece of art.  It’s also ground breaking for several reasons. First, because it’s the first movie that I recall where De Niro and Pacino share almost the whole movie together, and certainly the only one after each spending fifty years mastering their respective crafts.  Second, because the way it captures time in a bottle (through sets, costumes, mannerisms of the day, props, etc) is absolutely genius.  Third, because perhaps for the the first time in film history, it uses CGI as makeup.  Aka, it makes actors look younger through computer manipulation.  Since the movie is narrated in reverse, reverse aging the actors is pretty important.  Fourth, because it’s a 3 and a half hour movie about a very small bit of modern American history, without much action, yet it is captivating.  Perhaps its because all the key actors in the film (with the exception of Steven Van Zandt…yeah he’s in it too) lived through this history.  So they are doing a period piece that they lived through.  Pretty unique.  Ultimately its a classic Greek tragedy- one of the oldest tales of human nature- that of hubris and moral dilemma.  It’s interesting that Al Pacino, in a recent GQ article, says that he is finally ready to take on the part of King Lear, a part that he refused over the decades until now.  Perhaps his role here as Jimmy Hoffa had something to do with it. 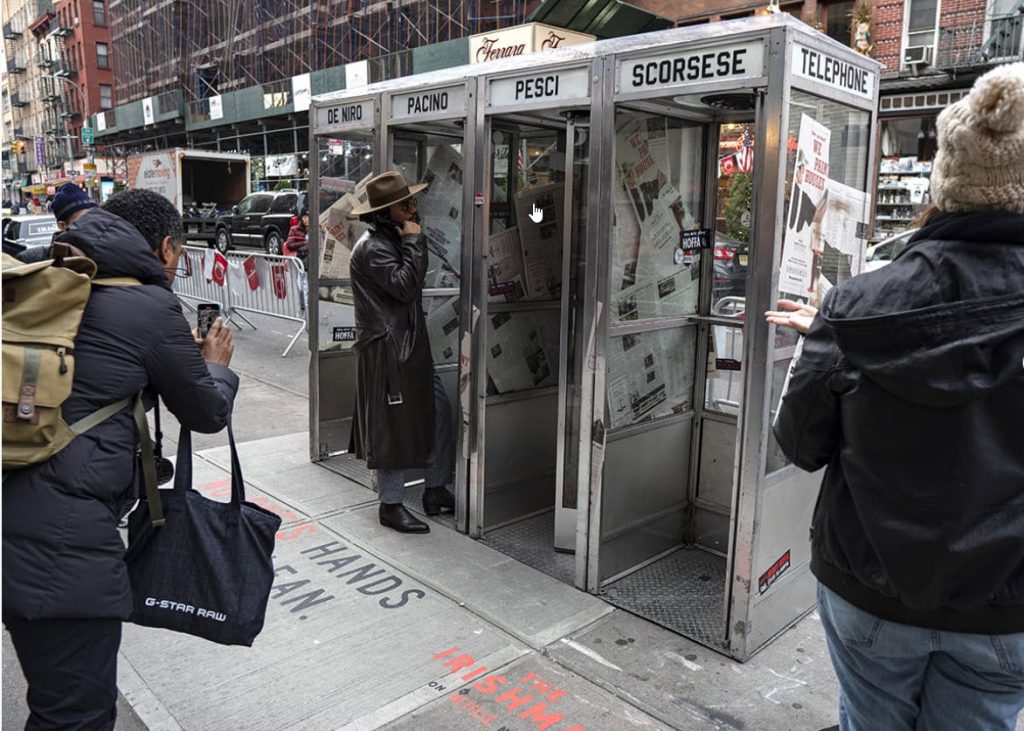 The fact that Netflix underwrote the film ($170MM plus) and the iconic director, Martin Scorsese agreed to sign with Netflix is also groundbreaking.  Netflix is not only clearly in the club, they are now its Chairman.  Harvey Weinstein (as seen hobbling out of court on page 6 this past Friday)…well, let’s just say he has lost his Chairmanship and is stuck in his own version of King Lear.  Speaking of Netflix, if you are going to watch it on Netflix as I did, I strongly recommend you watch the interview before you watch the movie.  Its like sitting at a table at an old steak house with Scorsese, Pacino, De Niro and Pesci while they freewheel about the movie, their friendships, their careers and life.  Two of my favorite Scorsese quotes from the interview:  “We are in the biggest revolution since the advent of sound.”  And “Every movie you make…it’s a learning experience all over again.”  As I watched him during the interview, all I could think is, that he has reached the pinnacle of his career.  Here he is having the golf balls to make a three and a half hour movie and not even given it a second thought on whether or not it was going to succeed.  We should all be so lucky to reach a point in our careers where we stop trying to pander to what the customer wants and do what makes sense.

for those holding the Chairman’s position in the outdoor industry right now,

Okay, before you think my own hubris has set in and I am ready for Siskel or Ebert’s job, what’s the point Johnsen?  Well, the point is, for those holding the Chairman’s position in the outdoor industry right now, dear God, don’t go down like Weinstein and second and more importantly, if we are not lying awake right now worrying about how we are going to get Netflixed (yes a new verb), perhaps we should be.  No one is infallible.

OOH Media Plan of the Year —The Winner Is