Watch the videos. This becomes a near permanent fixture in Chicago for the next 30 years!

“The Chicago Riverwalk” and “theMART” are Chicago institutions. They joined together to create digital
artwork which will be projected across 2.5 acres of theMART’s exterior river-façade, creating the longest and largest running digital Out of Home art projection in the world.   This becomes a near permanent fixture in Chicago for the next 30 years!

OOH Today wrote about it here first⇒ New 2.6 Acre OOH Canvas For Chicago’s Loop back in March when we reported the project was out for bid and shared with our friends in the direct projection business.

It’s happening. The inaugural opening will be September 29th.  “This will not just be a one-time spectacle, but a curated, ongoing series of rotating different creative that will be displayed up to two hours a night, five days a week, (Wednesday – Sunday), for ten months of the year. (March to December).” 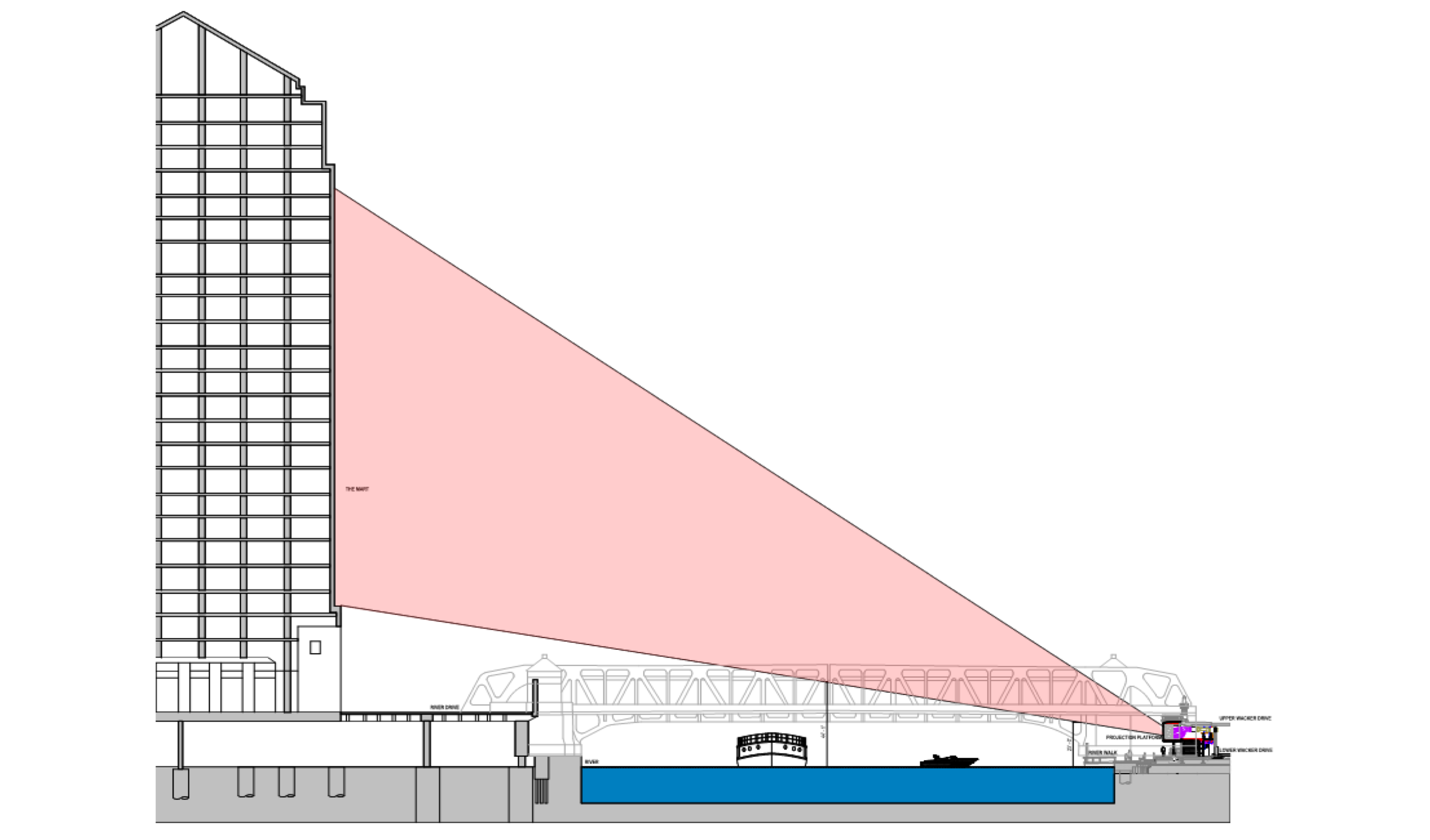 September 29, at sundown, area streets will be closed to traffic to enable safe public viewing of the projections. During the event live DJ and a Lantern Procession presented by Light Up My Arts (LUMA8). The program will begin at 7:15pm and run for 35 minutes followed by fireworks.

The launch of Art on theMART aligns with EXPO ART WEEK.

Obscura Digital, the projection mapping company, partnered with theMart owner Vornado Realty Trust and architecture firm Valerio Dewalt Train Associates, Inc. to design and implement the projection system which will illuminate theMART on a nightly basis. The project includes 34 projectors, totaling almost one million lumens projected on the building façade. It will be the largest permanent projection system in the world.

The City of Chicago and theMART work in partnership managing the projected artwork over the course of a
30-year agreement. Privately funded by Vornado Realty Trust, owner of theMart, Art on theMART
marks the first time a projection of its size and scope will be completely dedicated to digital art with
no branding, sponsorship credits or messaging.

theMART (formerly The Merchandise Mart), located in the center of the sought-after River North
submarket, is interwoven into the fabric of Chicago as an innovator in culture, art, business, fashion,
media and more. As the largest privately held commercial building in the United States, it is one of
the world’s leading commercial buildings, wholesale design centers and the preeminent
international business location in Chicago. Encompassing 4.2 million gross square feet, theMART
spans two city blocks, rises 25 stories, and is visited by an average of 30,000 people each business
day and nearly 10 million people annually. Offering continuous innovation and creativity from
leading manufacturers and showrooms, theMART serves as a business hub for interior designers,
architects, contractors, business owners and buyers, and recently has become home to Chicago’s
most creative and technologically innovative companies including Motorola Mobility, 1871, Yelp,
PayPal and MATTER, as well as Fortune 500 companies Conagra, Allstate, Kellogg, Beam
Suntory, Grainger and Caterpillar.

Google OOH —What You Don’t Know