Out-of Home,
defined as we have known it for years,
has an additional new meaning thanks to, who else?
TV.

If you don’t know what the following a,b,c, means, you should read this complete post.
a. Out of Home Audio Tuning
b. Tunity
c. How ‘Stormy Daniels’ OOH Lift Beat Tiger Woods’

For all you Millennials at ad agencies, you got this, skip my comments and proceed directly to the Stormy Daniels’ headline below. (I never thought I would ever have an occasion to mention Stormy Daniels’ or any porn star’s name in one of my news/blogs. Let alone 4 times!  Sorry there will be no links to her. You are on your own. Just remember, you are probably at work right now or as some of you have a made a point to tell me, reading us from the bathroom, eeuw (yuck).  Once you leave the OOH Today page for Stormy Daniels’ site, well, don’t do it.

Back to the new Out of Home definition

Our old competitive friend and party crasher, television is claiming new audience.  Some of you were around prior to television, when OOH enjoyed less competitiveness, contending only with radio, newspaper and magazines. Then TV came crashing in and we had to share more of the proverbial advertising pie.  Just as radio and newspaper are on the ropes, with magazines long gone to the locker-room, TV jabs on.

TV has managed to add to their audience counts and data, the people who are away from home or ‘Out of Home’, and who are watching television from bars, offices, restaurants, gyms, airports, hospitals, or anywhere there is a waiting room with, a TV.  TV tuning in out-of-home locations.

TV has managed to add to their audience counts and data, the people who are away from home or ‘Out of Home’, and who are watching television from bars, offices, restaurants, gyms, airports, hospitals, or anywhere there is a waiting room with, a TV.

When you see headlines and graphs like the one below and scratch your head saying ‘whaaaaat’?
‘Stormy Daniels’ Out of Home?!   ‘Out of Home Tuning Lift’.
Now you know.

A quick tutorial on how TV knows and measures OOH viewers?  It’s the newest advertising media, internet/mobile. A company named Tunity, has an app for mobile phones which plays the audio from the TV shows on the screens from the ‘public areas’ mentioned above, right to your earphones.  Pretty, pretty, pretty cool.

Tunity allows you to scan a muted live TV and get the audio streamed directly to your phone.  Scan any Live TV for one second and the app will identify the channel and stream the synchronized audio.  Use at a sports bar, gym, airport, waiting room, and. The audio will only work if you are in close proximity to the TV.

Read the story, by Charlene Weisler for Media Post.

I have to question why Ms. Weisler is ‘surprised by the discovery that Stormy Daniels’ appearance on CBS’ “60 Minutes”, was one of the highest out-of-home rated shows’?  Same reason Television and Netflix, Amazon, Apple and Crackle (which are not TV but are watched on a TV) are so popular,
Sex sells…and politics and sports. God, TV time must be sooo easy to sell. 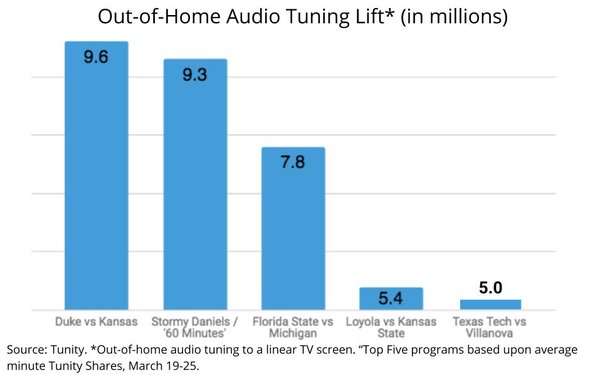 Using its proprietary technology to detect TV tuning in out-of-home locations such as bars, gyms, offices and other venues, Tunity found Daniels’ highly anticipated interview on “60 Minutes” was one of the highest out-of-home rated shows so far this year.

“While losing approximately 25% of her lead-in from the Duke vs. Kansas game, she still managed to rank second for the week in Tunity Share,” says Paul Lindstrom, head of research and analytics at Tunity.

As an audience metric, the Tunity Share is a composite metric of traffic, attention, and tuning in near real time for out of home on a minute-by-minute basis.

“Stormy’s audience was 50% higher than such highly watched events as Tiger Wood’s one under run at the Valspar Championship and triple the peak Tunity Share for Shaun White’s Gold Medal win at the Winter Olympics,” Lindstrom adds. “At her peak, she accounted for 80% of all Tunity usage and was the dominant draw across all venue types.”

Because out-of-home screens are often “curated” to sports and news, such formats command a disproportionate amount of out-of-home programming distribution.