How is LinkNYC Really Doing? 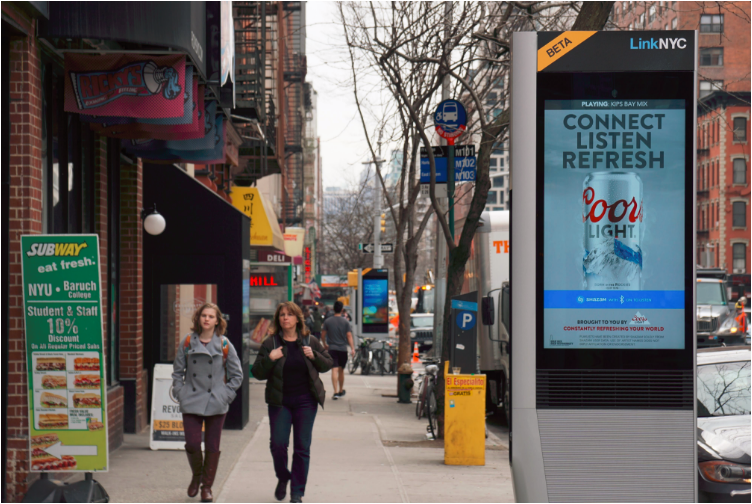 LinkNYC is scheduled to complete installs over the next several years, across the five NYC boroughs.  There are complaints that Link is failing to cover southern Brooklyn,  according to the Brooklyn Reporter and there are currently 1,513 active Link locations, and another 241 that have been installed but are still waiting for internet hookups.

Link usage appears to be successful as the number of calls registered by the LinkNYC system is 200,000 per month, or 50,000 per week on average, with 600,000 unique users connecting to the Links’ Wi-Fi or cellular services each week.[34]  Those preceding numbers were as of January 2018.

LinkNYC is a project the City of New York and CityBridge, a NYC-based consortium of Intersection,  Qualcomm and CIVIQ Smartscapes.

Link is also building similarly in Philadelphia and London. LinkPHL and LinkUK

While nearly everyone hails LinkNYC as a leader in the movement forwarding smart cities, there are a few who suggest otherwise. One of those is Sixteen:Nine.

SIXTEEN:NINE is an online news and analysis publication focused on the digital signage industry.  Founding Editor Dave Haynes shares his comments of recent observations on LinkNYC.

Here is Dave Haynes’ full post from his May 30 publication.

by Dave Haynes, Founder and Editor of SIXTEEN:NINE

Few observers will be surprised to learn the much-touted NYC smart city rollout of screens replacing payphone boxes is not going as well as envisioned.

I don’t get to New York that often, but when I do, I see lotsa black and blue screens dotting the sidewalks. I hear the same from people who live and work there.

Now there is word, via the New York Daily News, that the consortium that did the deal to put in as many as 7,500 units around the five boroughs has been granted more time to get that done – as in two more years – and more time, as well, to provide revenue from the screens to the city.

“Adjustments in deals between private companies making use of public space happen — but why did these changes have to be rushed?” the paper asks in an editorial today. “The de Blasio administration gave notice of the Franchise and Concession Review Committee meeting the day before the Memorial Day weekend. A vote was scheduled for the next business day, Tuesday.”

Outages aside, the interactive stations have had to be re-thought because the touchscreens were being used by some people to stream naughty videos. So they were disabled.

Digital street furniture is now common in many big cities, so digital posters popping up here, there and everywhere is just a fact of modern advertising life, and reflects a need for cities to find as many ways as possible to generate revenue that isn’t from tax increases.

The issue I have is how these digital posters are being positioned as smart city technologies that are all about the future!!!

They’re not. They’re digital posters with some other stuff bolted on, that could as easily or more cheaply be bolted on to the top of a bus shelter or up a little bit on a light pole.