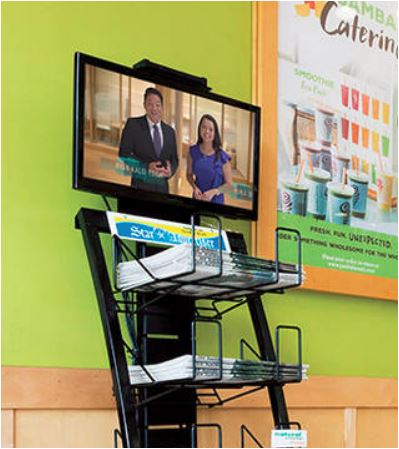 It seems Out of Home is fast developing in a state which traditional OOH is illegal.

The local newspaper, the Honolulu Star-Advertiser and its parent company Oahu Publications, started a ‘Digital Billboard Network’.  A rather liberal interpretation of the word ‘billboard’ for the OOH Industry.  The ‘billboards’ are digital screens, many of which are mounted on newspaper racks, located at retail stores throughout the state.  Examples of retail locations are Longs Drugs, Jamba Juice, Aloha Island Mart, L&L Hawaiian Barbecue, Hele, Waikiki Yokocho, Don Quijote, Zippy’s and Tamura’s.  See an example of a daily feed below.  Click on the arrow.

The screens are connected as a network and broadcast video news and advertising with content including point of sale messages from the retailers.

Dennis Francis, president of OPI and publisher of the Star-Advertise, uses the technology to generate revenue and has created a new profit center using digital out-of-home technology generating over $1.2 million in annual incremental revenue during its first year in 2017.

According to Francis, “The daily audience of the entire DBN now rivals that of a local radio or television morning show, and statistically the system is among the top five broadcasters in the state of Hawaii.”

Could this be coming to Maine and Vermont in the near future?

Do It Outdoors Media ⇒Sarah Maher