“If England Gets Beaten, so will she”

These are graphic images of injured people, photographed to resemble specific countries’ flags, displayed on #billboards and posted on social media.  The photos are provoking and memorable. The mission is to start a social conversation. Out of Home delivers.

Titled, ‘The Not-So-Beautiful Game’, the powerful #OOH poster campaign, created by JWT London for the National Centre for Domestic Violence, highlights the link between soccer matches and #domesticviolence. 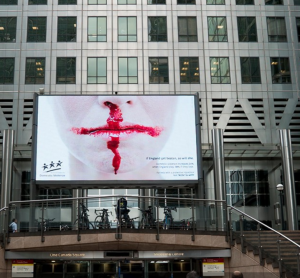 In England for example, domestic violence increases by 26% when they play and 38% if they lose.  #WorldCup is the premier soccer tournament world-wide.  In some parts of the world, players on losing sides have been beaten and murdered.  Soccer is to many, like American Football is to rabid US fans, only soccer fans typically are figuratively on steroids. It is a sad statistic documenting domestic violence and sports which the US is not immune.

The  OOH campaign features images of national flags on women’s faces with blood. The England poster features blood running from a woman’s nose, forming the St George’s flag across her face.  The copy says, “If England gets beaten, so will she.”  Other executions simulate flags of Japan and Switzerland on women’s faces while a male clearly with trauma, has a Belgium flag.

The final game is played Sunday at 11 AM Eastern Time in Russia with Croatia versus France.
England and Belgium play for third place Saturday AM.

The poster campaign will run in England, Switzerland and Japan until the end of the World Cup.

The Not-So-Beautiful Game’ campaign for The National Centre for Domestic Violence. 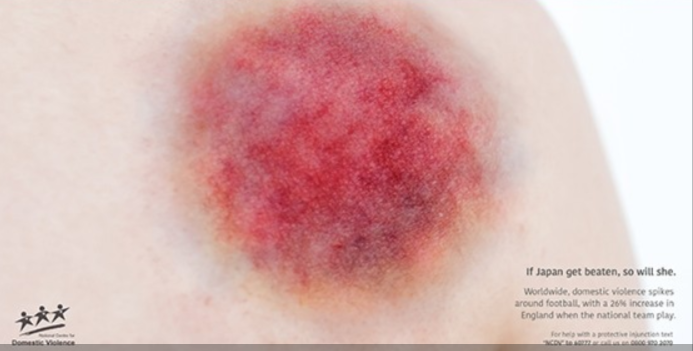