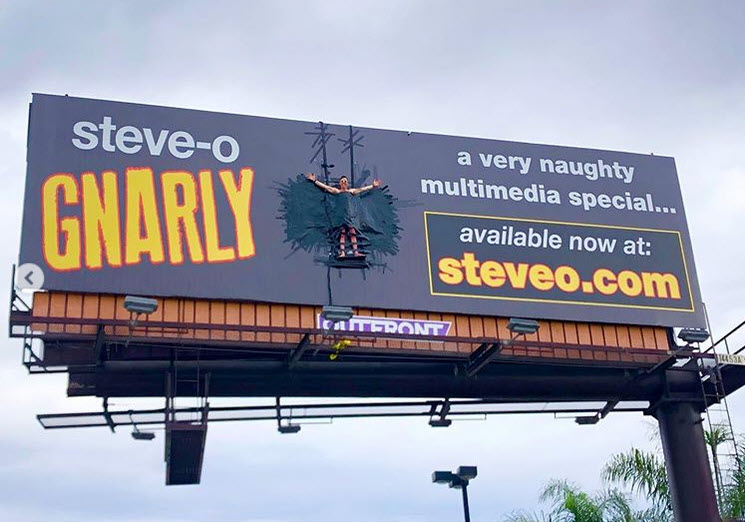 Steve-O Duct-Tapes Himself To Billboard

Standing on a narrow platform, which was difficult to notice from the street, The “Jackass” star and television personality, Steve-O, known for his crazy stunts and pranks, was livestreaming himself late last week, Thursday, on his YouTube channel. Steve-O, whose real name is Steven Glover, was duct taped to an OUTFRONT billboard in Hollywood promoting his upcoming special, ‘Gnarly’.

Check out steveo on Instagram. Not many people actually saw him and the billboard in person, but the beauty of social media, allowed hundreds of thousands to view the stunt. Any familiar names? 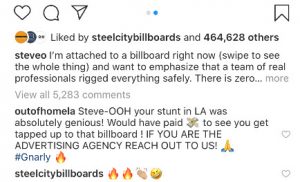 “I’m attached to a billboard right now (swipe to see the whole thing) and want to emphasize that a team of real professionals rigged everything safely. There is zero chance of me falling, and it’s important to me that we not waste any valuable city resources on this. I’m happy to just hang out, and really want the world to know about this project I worked so hard on. It’s called Gnarly and, If you’re over 18, check it out at steveo.com! Thanks!”

LA Firefighters using a ladder truck, took the ‘Jackass’ down to safety by mid morning. Steve-O, who was wearing only a diaper, was examined by fire personnel and released soon after. Meanwhile, California fires burn. Does the stuntman owe the Firefighters some dough to cover their costs to rescue?

The Los Angeles Police Department stated that Steve-O had rented the #OOH #billboard and was not trespassing, no crime was committed. I wonder what would have happened if he had fallen?  So if someone rents a billboard, they have access to it, like climbing on it?  Or what about having an event below it? Mind you, all without permission… wink. wink.

Sources with OUTFRONT Media anonymously told OOH Today, “they knew nothing about the stunt”.  Makes us wonder how that would be the case looking at the layout and spacing of the creative.  Surely they would have had him sign a waver or hold harmless agreement. And if OUTFRONT did know, wouldn’t it be the smart move to deny knowledge?  On the other hand, by not knowing, could OUTFRONT still share in liability if he did fall? A close examination of photos, shows what appears to be a safety lanyard coming down from the taped area and tied off to an area at the catwalk where a safety cable is typically located. Steve-O’s ‘zero chance’ of falling maybe overstated because there is always a chance of falling, the safety belt tied off would significantly reduce the percentages of catastrophe.

A digital billboard could not have accommodated the creative execution. One of the beauties and advantages of static.

Who’s tuning in to the show?

The West Coast Steps Up