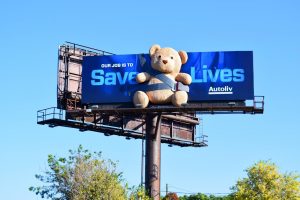 Detroit residents are getting a unique visual on their morning commute today from OUTFRONT Media, one of the largest out-of-home advertising companies in the country, with its latest installation featuring a three-dimensional, 18-foot tall teddy bear safely buckled into the backseat of a car.

The billboard located on interstate 75 is one of the largest three-dimensional displays ever constructed in the Detroit metropolitan area, and was created for Autoliv, the worldwide leader in automotive safety systems. With a purpose and mission to help save lives, Autoliv worked with OUTFRONT Studios – OUTFRONT’s in-house creative team – to create an eye-catching, can’t-miss experience to showcase just that.

DETROIT — OUTFRONT Media Inc. unveils new billboard campaign designed by its in-house creative team, OUTFRONT Studios, for Autoliv Inc., a maker of life-saving products that include airbags, seatbelts and steering wheels. The teddy bear was built by Imagine It 3D and is one of the largest three-dimensional displays ever constructed in the Detroit metropolitan area.

Detroit commuters traveling northbound on Interstate 75 out of downtown will see a three-dimensional, 18-foot tall teddy bear safely buckled into the backseat of a car with a clear message that captures the essence of Autoliv’s purpose of saving lives and protecting those we love.

“We are excited to bring awareness for our company,” said Alison Brawner, Vice President of Human Resources – Autoliv North America. “Every Autoliv employee takes great pride in knowing that everyday across the world, millions of families rely on the products they make to keep them safe. Our work really matters, and this is a fun and creative way for us to express that pride.”

Interstate 75 is a major thoroughfare for Detroiters and specifically for automotive professionals. Autoliv’s billboard on N. I-75 & Dequindre will deliver over 2.2MM impressions over 4 weeks.

Out of Home advertising continues to prove itself to be a tremendous, cost-effective way for brands to reach their target audience in their everyday lives. This creative for Autoliv offers a can’t-miss experience and showcases the brand’s purpose as an automotive safety supplier.

“We are excited to partner with Autoliv to create an icon that helps to support their vision of ‘Saving More Lives,'” said Nicole Mapp, Art Director at OUTFRONT’s Detroit Office. “The buckled-up teddy bear is not just a billboard, but it is symbol of Autoliv’s commitment to creating products that keep everyone safe.”