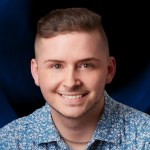 “I’m doing something new with printed billboard designs that I believe would make a difference to the printers and also to the installers that put up the design,” explained Frick. “I’m simply putting in notes in the bleed area that speak to the installers and printers with positive messaging.”

“I’ve seen how much work goes into a vinyl being printed and prepared and it’s a big process and there’s a lot of hard-working people that are involved and I think they should get a shoutout every now and then,” said Frick.

Every client with a static billboard has the option of including the special messages. Having already received positive feedback on the initiative, Wes plans to evolve the concept by adding funny notes and jokes.

Amid an era of heightened rates of stress and burnout on the job, a small message of thanks may just make a big impact on the folks that make OOH advertising possible.

POLY to Push Out of Home’s Creative Boundaries