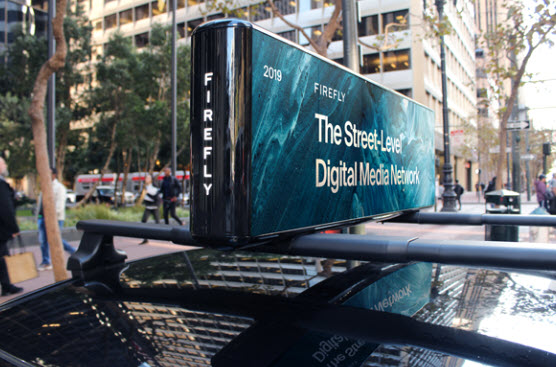 Street.IQ is the first mobile digital OOH platform to boost the power of ads with live creative insights and weekly optimizations that focuses on what delivers the best results

San Francisco –  Firefly, the company leveraging taxi and rideshare vehicles to build a street-level digital media network, has announced that six months after introducing its Street.IQ technology, it has helped brands ranging from Allbirds to Colgate optimize their out-of-home creatives and exceed their digital advertising goals by reducing average costs per action by about 34%.

Street.IQ leverages real-time data so that campaigns can be optimized on the fly, and it utilizes a patent-pending measurement methodology dubbed “the Ghost Car.” It conducts statistical experiments by tracking and comparing the actions of a group of people exposed to taxi- and rideshare vehicle-mounted ads to the actions of a control group made up of people in the exact same location, just minutes later. This helps Firefly learn what messages are most effective and adjust creative elements such as colors or call-to-actions to lead to the best possible results. Alongside creative, Street.IQ can find the most effective locations for ads, as well as pinpoint the best days of the week and times of day for the ads to appear.

“We know that the success of our clients’ campaigns is influenced heavily by effective creatives. That’s where our Creative Excellence initiative was born from. We’ve combined data from our live measurement and optimization platform, Street.IQ, and the skills of our in-house creative department to learn what works and make adjustments to creatives that immediately leads to better, tangible, results for our clients,” said Firefly Co-Founder & CPO, Onur Kardesler.

In a recent Chicago-based campaign for a billion-dollar footwear company, Street.IQ was employed to introduce new creatives into the mix. One, with a lively green background that the brand hadn’t used before, outperformed the other ads with the highest conversion rate. Firefly’s creative optimizations led to a reduction in cost per store visit by 27.5%. The color will now play a larger part in the company’s OOH ads going forward.

In a campaign for a delivery company, Firefly utilized Street.IQ to uncover the best performing creative out of four shown to pedestrians then introduced other ads around that theme, driving up conversions. Motion was also incorporated into ads, decreasing the cost per first order by 43.75%.

According to a survey commissioned by Verizon, 90% of nearly 250 brand and agency media decision makers agreed digital out-of-home advertising (DOOH) was the right type of media to invest in due to device fatigue among consumers who are increasingly spending more time outdoors. Most advertisers said they planned to increase spending within the next year, with heavy interest in DOOH.

Another study, by Nielsen, found that consumers react well to DOOH, with more than half noticing digital billboards that gave directions to a store, business, or restaurant. Of those, 57% immediately visited the business, with nine of 10 of those customers making a purchase. DOOH viewers with smartphones are also likely to engage in actions on their devices after seeing ads. Similar positive figures were also seen among consumers who noticed digital street furniture and ads on public transportation.

“The future of OOH is the channel’s ability to adapt, react and prove effectiveness just like a digital ad channel. Street.IQ is our step towards a technologically driven ad solution that has data and analytics at its core. Now with Street.IQ, clients can not only make their Firefly campaign as effective as possible, but use this as a holistic optimization engine for testing and learning what elements of a campaign work, to inform a more powerful OOH strategy across multiple channels,” said Firefly CRO, Cecilia Lang.

About Firefly
Firefly is the street-level digital media network that connects audiences with dynamic media on taxis and rideshare vehicles. The company works with taxi companies and rideshare drivers to install its proprietary advertising displays atop their vehicles. These proprietary screens deliver dynamic content based on location-based, WiFi-enabled triggers. Firefly provides an additional revenue stream to maximize drive time and empowers brands to efficiently engage consumers across our nation’s busiest cities, including San Francisco, Los Angeles, New York City, Chicago, and Miami.