A Message From Movia Media 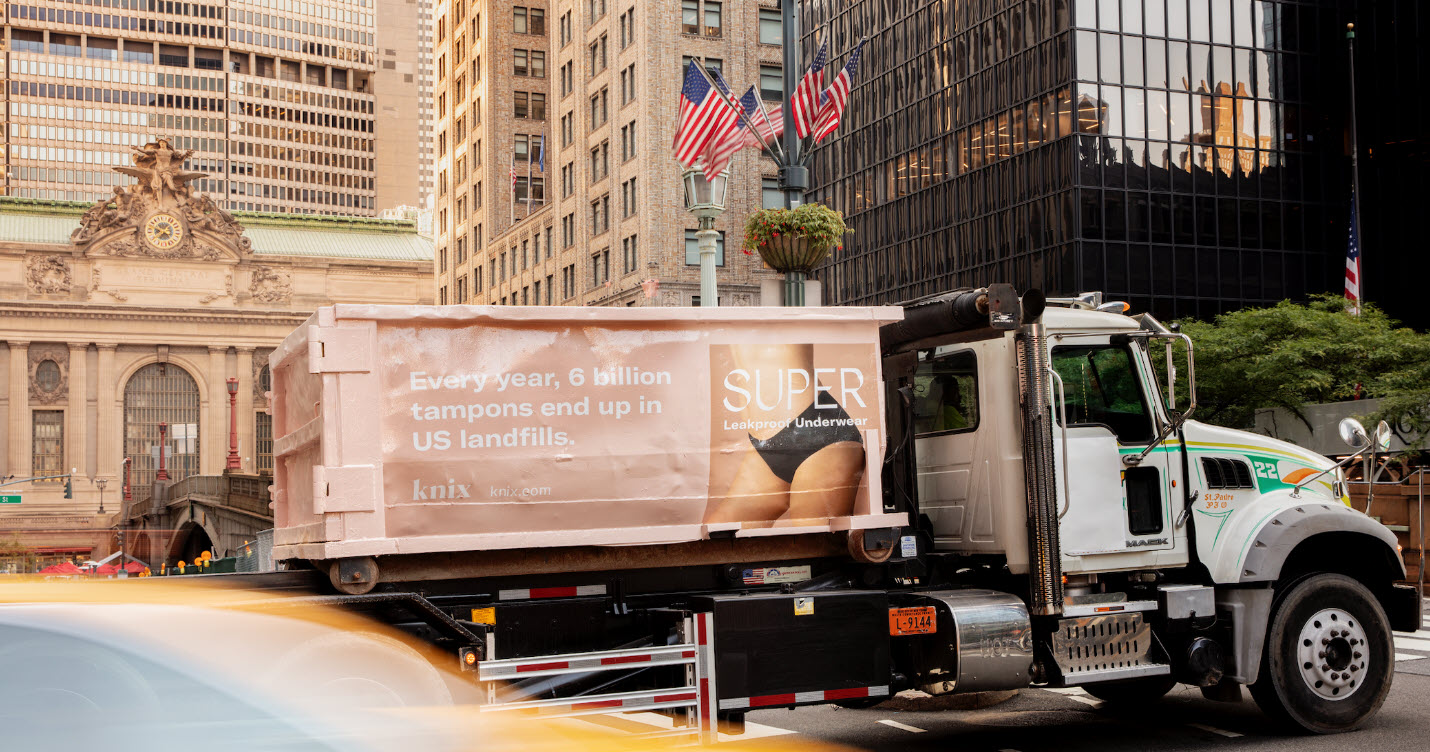 Attention females of New York!  Knix has a message for you ­– thanks to a powerful mobile out-of-home (OOH) ad campaign using, of all things, dumpster trucks.

Knix, an intimates brand, wanted to launch their new Super Leakproof Underwear in a big way, by raising awareness on period sustainability.  In a matter of days, the timely campaign – launched the same week as Women’s Equality Day – gained attention from thousands of New Yorkers and millions more online — getting all the buzz on social media platforms.

Partnering up with Movia, the truck-side advertising company, Knix customized a dumpster truck with a vinyl wrap that called on women to “stop trashing their periods.” Touring NYC’s most iconic landmarks — including Times Square, Grand Central Terminal, and Brooklyn Bridge — the campaign took a clever spin on traditional mobile billboard advertising and used a garbage truck as a larger-than-life metaphor for female hygiene waste. Staying on top of the environmentally conscious consumer trend, the ad called attention to the 6 billion tampons that end up in US landfills every year.

By pairing this OOH campaign with a 30-second national TV commercial and promoting it on all social media channels, Knix’s truck-side campaign was heard loud and clear across the country — encouraging women to “break up with disposables.” The campaign blew up and was quickly picked up by various marketing, lifestyle, and female empowerment blogs, while also becoming a popular topic of discussion on both Twitter and Instagram. Marketing Dive called the use of the garbage truck a “clever spin on OOH advertising, which has seen a decline since the coronavirus pandemic pushed many brands to cut spending on the format as people hunkered down at home.” Strategy said that the truck-side ad was able to “keep the environmental impact top of mind,” and that it “brought the campaign to life”. Furthermore, a women’s lifestyle blog called She Does The City praised the truck-side ad for its bold impact in driving Knix’s message home. 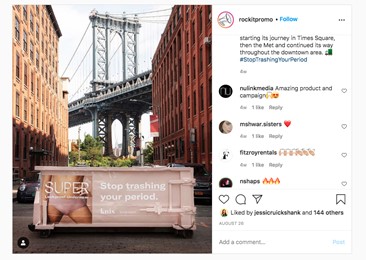 Knix itself further promoted the NYC truck-side stint on Instagram (see photo left) with the caption, “Underwear so good, we thought they deserved a spot at the MET”. The post quickly gained traction as comments applauded the unique and innovative garbage truck-side ad. 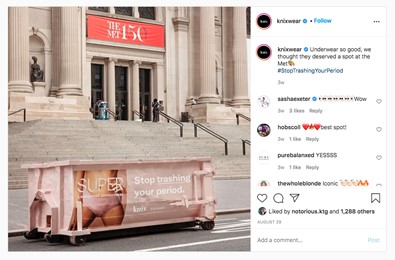 The award-winning PR agency, Rock-it Promotions, also shared another photo from the campaign that displayed the garbage truck wrap to their 13,000 followers.

On Twitter, numerous marketers and digital media agencies reposted the Marketing Dive article about the campaign. 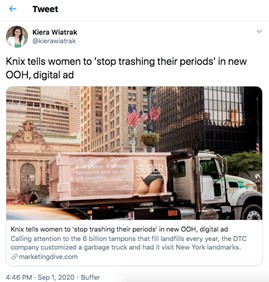 With the help of Movia, Knix was able to create an extremely unique and unforgettable campaign. The placement of the Knix trucks at iconic locations, like Times Square, worked to generate massive exposure for the brand and the new product, spreading the initiative like wildfire in the news and on social media to millions of people. Together, Knix and Movia showed that out-of-the-box OOH thinking can transform a brand from a small startup to the most-talked-about topic in the marketing world, overnight.

The views and opinions expressed belong solely to the author, and not necessarily OOH Today

A Message From Movia Media