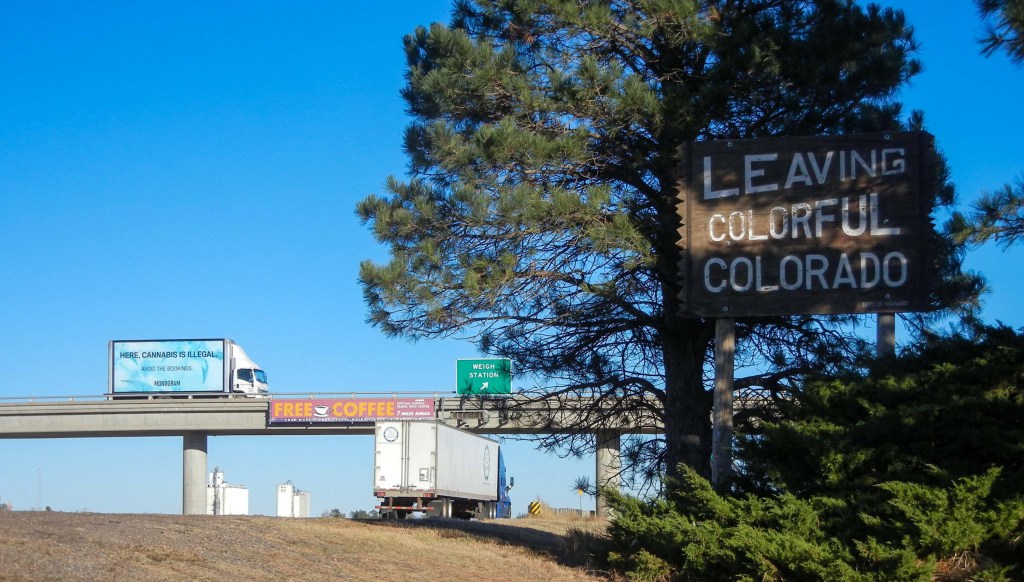 Monogram Stakes Out Arbitrary Borders for Cannabis with DIO

One of selling points of a mobile billboard is- well, it’s mobility. Do It Outdoors is continually thinking of new ways that really showcase that fluidity; so, when Quan Media Group came to them with the Monogram project, the team jumped to action to make it happen.

“The ask for Monogram was a tough one.  How would we be able to make a true impact on state borders where there was virtually no OOH (or in most cases, limited opportunities).  After some internal brainstorming, we realized that working with Do It Outdoors made the most sense as mobile billboards can literally be taken anywhere.  Within days, the DIO team had recommended routes, were moving at the speed of light, and seamlessly integrated with Quan and their partners at the creative agency, Matte.  This execution couldn’t have gone any better – evident by the immense amount of press it got – and DIO was a large part of that.” said Brian Rappaport, Quan Media Group CEO.

According to Sarah Maher, VP of sales at Do It Outdoors, she and the Do It operations team researched roads and highways at border crossings of 10 states that have opposing marijuana usage laws to determine the best placement of the units.

“Once in market, our drivers scoured the nearby roads to find additional high traffic placement opportunities; all while keeping in mind that each side of the mobile billboard had a different message and had to be placed correctly”, said Maher.

The campaign launched on the 50th anniversary of the Controlled Substances Act of 1970, and close to the 2020 Presidential Election. While this campaign’s intents aren’t political; the timing couldn’t be more relevant.

In an article from AdAge published on October 27th, 2020; Jay-Z is quoted as saying: “For so long, cannabis culture has been marred by the effects of the Controlled Substances Act and stigmatized by political agendas. While there has been progress, as we launch Monogram, we felt it was imperative that we call out the arbitrary borders that still demarcate who can benefit from cannabis, whether that’s through business or the positive effects of its use.”  The mobile billboard campaign gained nationwide notoriety from media outlets including The Source, AdAge, and Newsbreak.

Latest Report Says Ad Markets Will Take Years to Recover from COVID-19 —What About Out of Home?