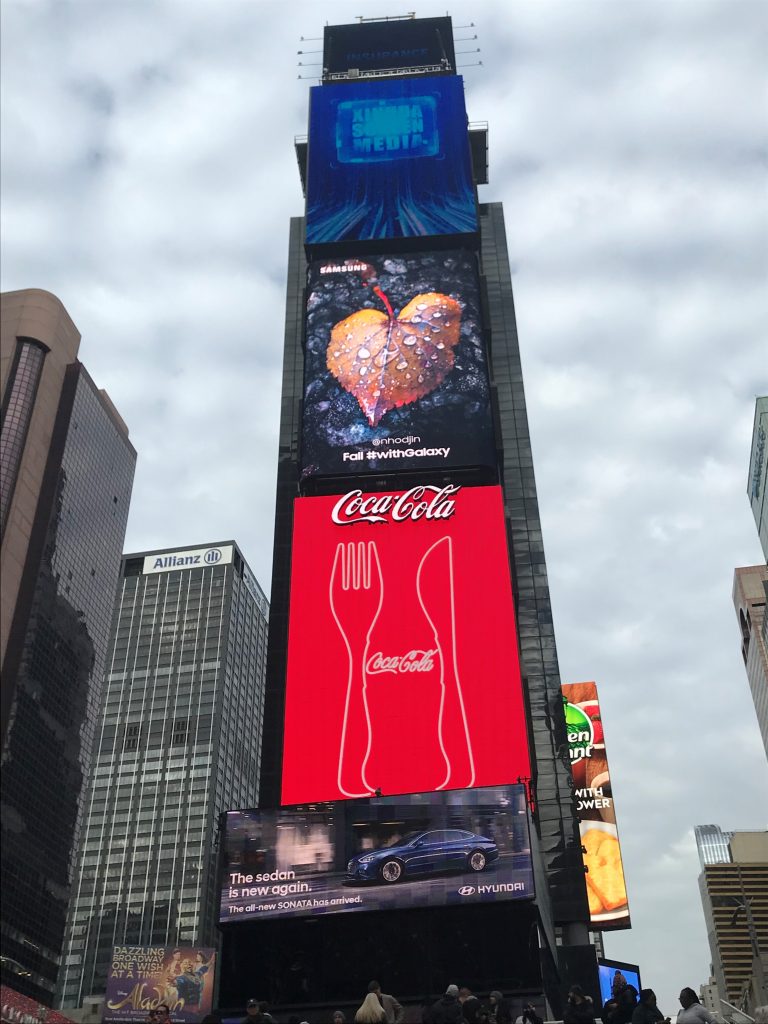 About the same time I most recently saw the Times Square Coca Cola digital billboard, (see photos) I read a post written by Dave Haynes, editor for Sixteen:Nine regarding the same Coke Digital Out of Home structure. If you think things go better with Coke, think again, not the relatively new Coca-Cola digital LED in Times Square.

When I saw it, the structure was ‘malfunctioning’ with its 3 dimensional moving ‘drawers’ becoming stuck. This was not the first time I witnessed this issue and will probably will not be the last. At the time this was built, I wondered about the wisdom and functionality of moving parts in digital signs verses providing the appearance of movement with a straight up LED.  I am not sure John and Jane Q Public would know the difference. Ah, but we in the sign industry notice. As we should.

A brief side track.  When I worked for Posterscope in Atlanta, the head of the office there was Chris Gagen.  Chris was SVP Director of the Coca-Cola Partnership for Posterscope.  He was instrumental in the design, vetting, build out and transformation of the previous Coke Digital which inhabited the same space just prior to this newest rendition.  Save the details to say, if this ‘breakdown’ happened while on Gagen’s watch, there would be hell to pay, every day, until it was repaired. This is not to say that Gagen was difficult. No, quite the opposite. He was among few peers, focused and committed to his clients. Gagen understood the importance of brand and image.

Back to today’s Coke Digital.  We read Dave Haynes online pub called Sixteen:Nine from time to time and find it interesting and well written.  Sixteen:Nine is focused to Digital Signage Industry and is thorough about it.

OOH Today didn’t write about the Coke malfunction, (we should have) Dave Haynes did. Let us share the insightful Sixteen:Nine post below.

‘Now The Kinetic Coke Board Has Modules Stuck in Place’

Dave Haynes is the founder and editor of Sixteen:Nine, an online publication

It is not my life’s work to detail the ongoing woes of a global brand’s Times Square ad display, but the Coca-Cola LED board in NYC is endlessly interesting.

Last week, there was a maintenance crew doing something or other at the display that no longer does mechanical shape-shifting.

Now The Kinetic Coke Board Has Modules Stuck In Place