Is This Outdoor Copy too Profane? 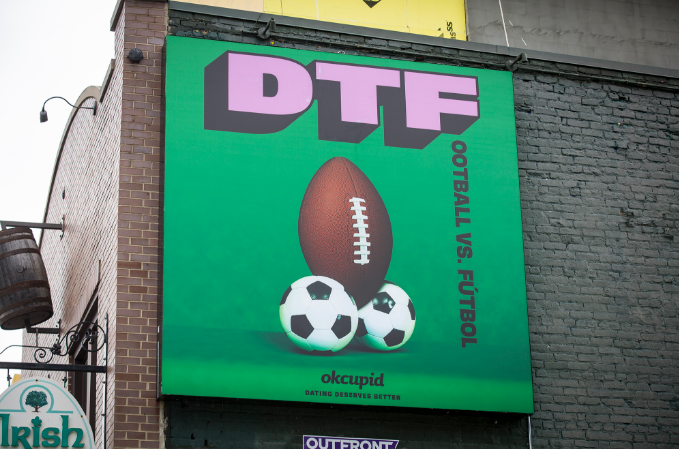 OkCupid’s campaign, ‘DTF’ is too suggestive for the Chicago Transit Authority, (CTA). CTA banned the creative and it could spell the big O, as in Opportunity, for you.

The CTA is not Down To the various new ‘F’ words for an ad campaign which ran in NYC subways earlier this year.  See OOH Today story from January 4 here⇒OkCupid Outdoor Campaign, Down To …

The popular dating app, OkCupid saw its creative, summarily refused for display in Chicago’s ‘L’ trains and buses.  The creative has been judged inappropriate. The ‘F’ words are ‘Fun,’ ‘Fight,’ ‘Fall,’ ‘Furiously’ and others. Yes, hoping your mind is in the same permissive set where the visuals are speaking to you, it’s an easy concern the ‘F’ word is, well, ‘the F word’.  But it is not. Much a due about a design that has some fun with the phrase DTF.  But not on CTA public transit watch.

OkCupid Chief Marketing Officer, Melissa Hobley, should have some extra OOH dollars for Chicago.  Understandably, the Midwest prides itself on higher moral ground than NYC, but is this creative really that risky?

The CTA’s refusal could be your windfall. Contact Hobley. Time for another bulletin proposal for OkCupid.

Check out the  creative for the Windy City.

‘Orgasm’ copy on a Bus Shelter Acceptable in San Francisco