Love on Every Billboard

Chicago is getting their first this month 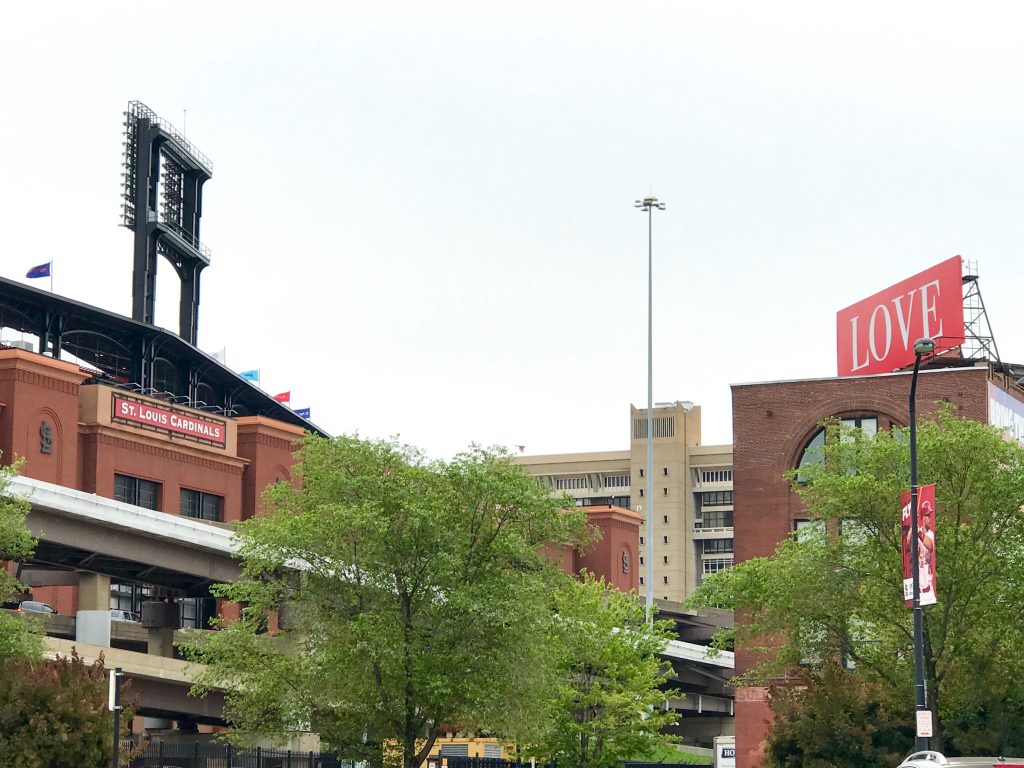 The seventh billboard to go up in the St. Louis metro area in the past year with simply the word LOVE stretched across the 14’ x 48’ board is scheduled to be installed Monday, December 9, 2019. The location is along westbound Interstate 44, 100 feet west of the Jefferson Ave Exit 289. This location will reach approximately 1.5 million people during its run according to Outfront Media data.

It was a year ago in December 2018 that Kirkwood resident, Carole Glauser, said she felt the call to join her friend, John Pogachar, in a growing movement of purchasing billboard space to put up giant messages of love. With simply the word—LOVE—in white letters on a red background, Pogachar put up the first billboard in Spokane, WA. He was inspired by a vision he had while communing with nature among the redwood trees in northern California. He made the decision to use his own money to put up a billboard with no agenda, no ulterior motives, nothing but the simple profound message and vibration of LOVE. Others, like Glauser, found such inspiration in that beautiful act of extending love on the planet that they asked how they could join him and do it in their own geographic locations…and the Love on Every Billboard movement was born.

The first Love billboard in St. Louis went up a year ago this December 12. Glauser sponsored the first one with her own resources and decided to be a steward to a St. Louis campaign to have more Love billboards go up if she could raise the funds through a GoFundMe campaign.

Glauser soon found that people were curious and made the nightly tv news and newspaper reports multiple times as the word continued to get out through social media. Donations came in to continue the movement locally and globally. St. Louis has had a total of 6 Love billboards go up in various locations in St. Louis city and county this past year. The most recent one was up this summer in the downtown area near Busch stadium for a 4-week cycle in sync with the Stanley Cup Celebration Rally for the STL Blues.

“All of these St. Louis love billboards after the first one has been paid for by friends, family, spiritual companions, and kindred people I’ve never even met. Through the GoFundMe site and from in-person donations, I have collected $5800 to spread the message of LOVE! I think that is remarkable!” reports Glauser.

In the past year the global Love on Every Billboard movement (which is now officially a registered non-profit organization founded by Pogachar) has grown to a total of 82 billboards in 10 different states (Washington, Montana, Iowa, Pennsylvania, Missouri, Texas, Oklahoma, California, Ohio, and Michigan) and 5 countries (U.S., Canada, Russia, Austria, and Ukraine).

Glauser remarks, “Chicago, IL is getting their first love billboard this month! This incredible movement is still going and growing!  I am excited to see where it goes in 2020!”

Pogachar commented on the impact he hopes the signs have with those who see them: “I’m hoping they will pause and wonder—wonder how they can take in and use that 4-letter word. Those 4 letters encompass what this whole world is—just Love. I hope they bring it to their families, deep into their souls, to their workplace, to their friends, to their leaders and followers. I hope they embrace it and say it out loud. Love, it’s the only answer.”

Glauser agrees: “I believe in the power of LOVE—whether emitted from someone’s heart or from a giant billboard out into the world—it has the power to transform and heal and elevate the energy and vibration of anyone who enters its field. This movement is not a passive mission of putting a word on a static billboard. It is a calibration of energy where the frequency of love is being anchored and broadcast into the invisible, but very real, energy field of our physical planet Earth.”

Pogachar reflects on this past year of the growing movement, “It is total magic how this program Love on Every Billboard has grown. By getting out of my way enough to believe in my own idea, billboards with simply the word LOVE—no website, no URL—has grown from 1 to 82 billboards across the U.S. and world! People love the idea and it has been featured on the Today Show, a Jason Mraz music video, a documentary, and even in a movie released by Kyle Cease-Evolving Out Loud called The Illusion of Money. It makes me know how and idea can spawn from deep within yourself and can grow and change you and grow and change the world.”

For more information on the Love on Every Billboard St. Louis campaign, go to https://www.gofundme.com/love-on-every-billboard-st-louis-campaign.

For more information on the Love on Every Billboard Movement, go to https://www.loveoneverybillboard.com/.

How Should Brands Buy #OOH Media?