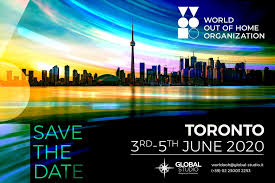 Katrin Robertson, CEO of blowUP media and a board member of the World Out of Home Organization, will head the Organization’s panel of judges for its 2020 Awards, to be announced at its Congress in Toronto from June 3-5, 2020. The judges will also include Organization President Tom Goddard and Executive Director John Ellery.

As before, there will be two #OOH Creative Awards for Classic and Digital, A Lifetime Achievement Award, Leadership Award, a Technical Award chosen by Congress delegates following three shortlisted presentations and Rising Star, celebrating the contribution to global Out of Home of an executive 35 or under.

Judging head Robertson says: “These awards have become the benchmark for excellence in Out of Home and I’m honored to be asked to coordinate the very difficult task of choosing the winners. Entries are welcomed from all Organization members and National OOH Associations.”

Entry details are available of the World Out of Home Organization website at www.worldooh.org/page.php?id=55

The Lifetime Achievement Award went to Randy Otto, the pioneering President of Pattison Outdoor Advertising Inc., Canada’s leading independent Out of Home company and the Leadership Award to Tim Bleakley, CEO of the UK’s Ocean Outdoor. Ocean Outdoor successfully re-listed on the London Stock Exchange and made a number of important acquisitions in Europe.

Ocean also won the Technical Award, chosen by Congress delegates, for its ‘Sky Rescue: the Ocean’s biggest threat’ campaign with the broadcaster which urged people passing by its digital screens to identify the most menacing danger lurking in the oceans.

The Rising Star Award went to Victoria Hirst, Senior International Marketing Manager of blowUP media UK, for her work in helping to position the giant poster company effectively in a rapidly changing marketplace.

“The standard of our Awards, entries and winners, has risen steadily in recent years along with their numbers. This year we hope and expect the Awards to be an even greater celebration of this truly important and flourishing global medium.”

blowUP CEO Katrin Robertson says: “The standard of our Awards, entries and winners, has risen steadily in recent years along with their numbers. This year we hope and expect the Awards to be an even greater celebration of this truly important and flourishing global medium.”

About WOO
The World Out of Home Organization is the only global Out of Home Association, working to promote and improve the OOH industry on behalf of its members. Board members include the major International companies – JCDecaux and Clear Channel – as well as Ströer, Pikasso, and more recently blowUP media, OUTFRONT Media from the US, oOh!Media from Australia and Selvel One from India.

More information is available at www.worldooh.org

Cohoot in OOH —For Salespeople Working in OOH