Big Win for Branded Cities in Manhattan —Digitals and Spectaculars 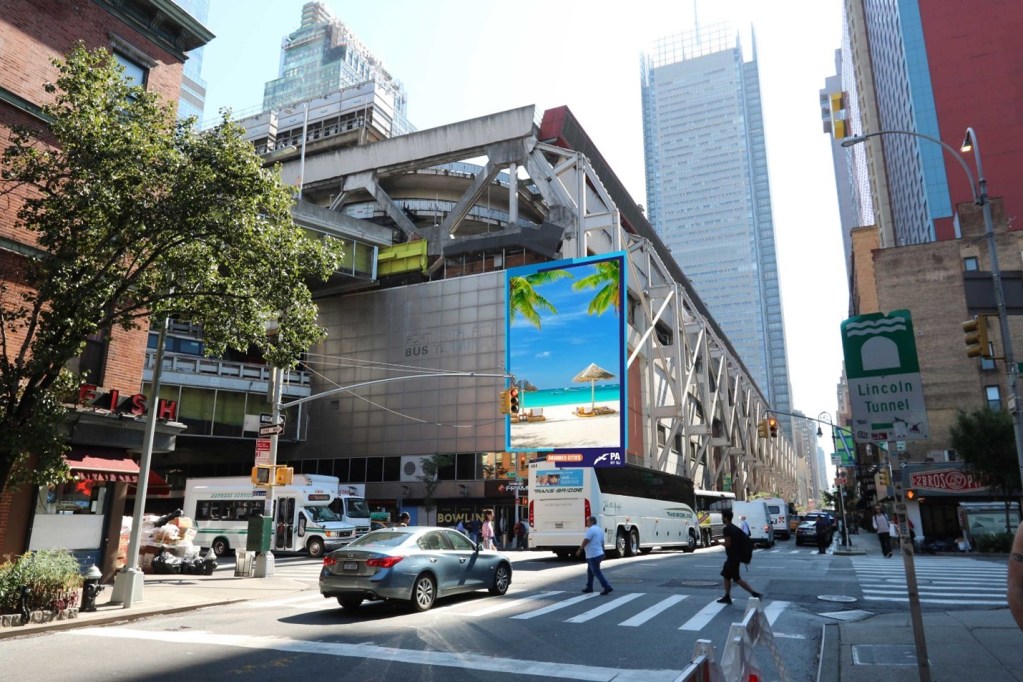 This is a big win for Branded Cities, awarded the exclusive right to develop and sell digital and spectacular advertising campaigns at the Port Authority Bus Terminal and select areas at the George Washington Bridge Bus Station in Manhattan

New York, NY – Branded Cities (“BC”), an iconic Out-of-Home media company, announced today that after a highly-competitive RFP process, the Port Authority of New York and New Jersey has awarded Branded Cities an agreement with the exclusive right to develop and sell digital and spectacular advertising and integrated marketing campaigns at the Port Authority Bus Terminal and select areas at the George Washington Bridge Bus Station in Manhattan.

“This agreement with the Port Authority of New York and New Jersey loudly signals Branded Cities’ continued intention to be at the forefront of the Out-of-Home advertising industry,” said Steven Ellman, Chairman & Chief Executive Officer of BC. “These digital and spectacular signs will be seen by hundreds of thousands of consumers every day, offering our advertising partners a valuable audience to target, while providing the Port Authority and its visitors high profile amenities. We are committed to maximizing the revenue potential of all assets for the Port Authority and look forward to a long and prosperous partnership.”

“These digital and spectacular signs will be seen by hundreds of thousands of consumers every day, offering our advertising partners a valuable audience to target, while providing the Port Authority and its visitors high profile amenities.”
Steven Ellman, Chairman & Chief Executive Officer of BC

“Today’s Board vote is a step forward in transforming our facilities and properties to provide a 21st century travel experience and allow for the creation of advanced displays that match the agency’s redevelopment across the region,” said Kevin O’Toole, Chairman of the Port Authority of New York and New Jersey. “Many of our facilities lack digital assets, which are key drivers for brands looking to advertise in New York and New Jersey. This contract will bring new brand partnerships that offer value to customers while delivering revenue to the Port Authority.”

“This contract advances two key priorities for the Port Authority: increased ad revenue and significant investment in modern digital infrastructure at our facilities,” said Rick Cotton, Executive Director of the Port Authority of New York and New Jersey. “Moving forward, these contracts will enable the Port Authority to better sell advertising rights to generate hundreds of millions of dollars in revenue, while travelers will benefit from the latest in digital display technology that allows for real-time alerts.”

The digital and spectacular signage deployment is anticipated to roll out in 2021. Branded Cities has aligned itself with the best vendors and sub-contractors for the project, which includes a strategic relationship with Heritage Outdoor Media who will be overseeing much of the construction and project management.

Once operational, the high-quality digital signage will provide the ability to dynamically update content based on real-time triggers and will allow for dominations of key areas throughout the Port Authority Bus Terminal and in select areas in the George Washington Bridge Bus Station. With a focus on enhancing customer experiences, screens will also provide informational services such as public service announcements, current news, weather, traffic conditions, as well as important emergency messaging.

About Branded Cities
Branded Cities, which is owned by EL Media and Shamrock Capital, is a leading Out-of-Home media company with an integrated network of premier digital and static signage across North America. The digital and static media assets span across some of the largest markets in the United States and Canada (New York, Los Angeles, Chicago, Philadelphia, Toronto, Vancouver, Montreal and many more) and are situated in the country’s most valuable Out-of-Home environments such as Times Square, the Las Vegas Strip, West Hollywood, Union Station, Yonge – Dundas Square and Canada’s leading shopping centers. Branded Cities empowers brands to deliver impactful and engaging messages to North America’s most desirable, hard-to-reach audiences. EL Media is an affiliate of The Ellman Companies (“Ellman”).  Ellman is a privately-owned media, real estate and investments group founded in 1972 with diverse interests in the U.S., Canada and the Caribbean.  For more information visit: brandedcities.com,

About The Port Authority of New York and New Jersey:
Founded in 1921, the Port Authority of New York and New Jersey builds, operates, and maintains many of the most important transportation and trade infrastructure assets in the country. The agency’s network of aviation, ground, rail, and seaport facilities is among the busiest in the country, supports more than 550,000 regional jobs, and generates more than $23 billion in annual wages and $80 billion in annual economic activity. The Port Authority also owns and manages the 16-acre World Trade Center site, where the 1,776-foot-tall One World Trade Center is now the tallest skyscraper in the Western Hemisphere. The Port Authority receives no tax revenue from either the State of New York or New Jersey or from the City of New York. The agency raises the necessary funds for the improvement, construction or acquisition of its facilities primarily on its own credit.  visit http://www.panynj.gov.

OOH TODAY believes all voices, not just the loudest, must be heard 3832 posts 550 comments