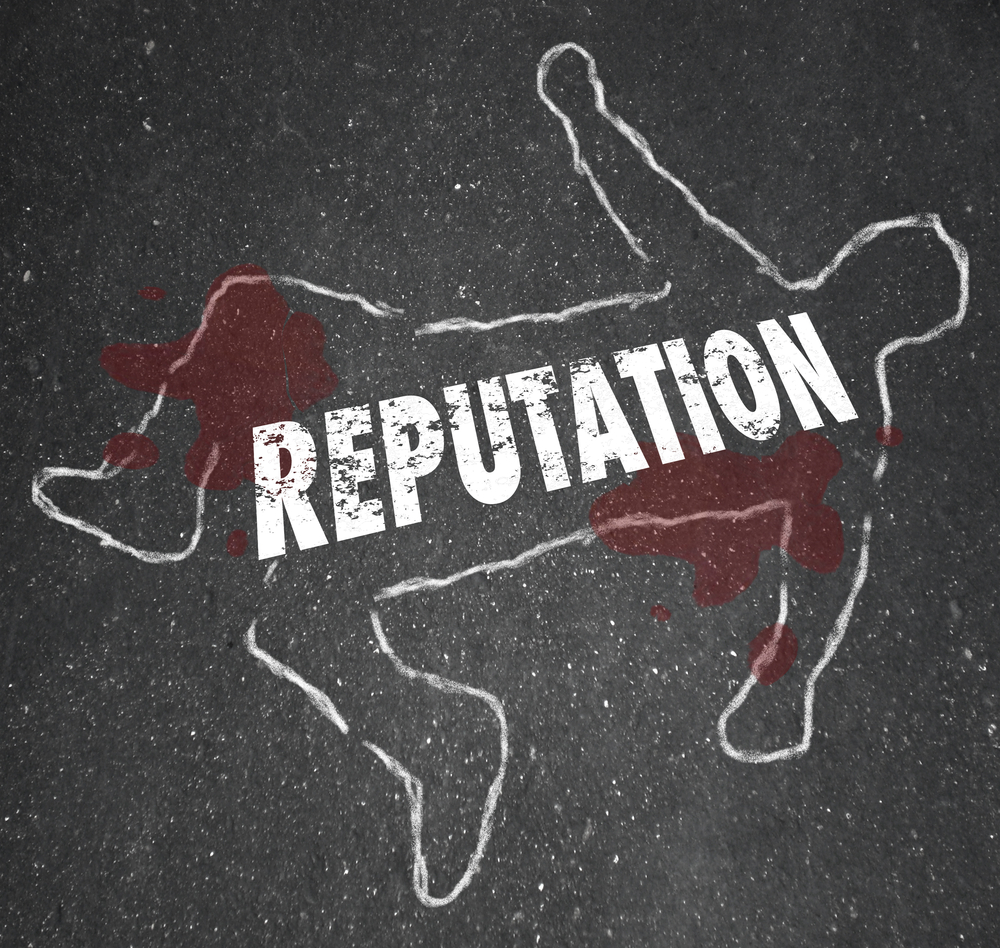 “I don’t give a damn ’bout my reputation
You’re living in the past, it’s a new generation
A girl can do what she wants to do
And that’s what I’m gonna do”

https://youtu.be/LvoV2Lfk7Qg  (worth the watch for a little morning pump)

Was Joan Jett THE female bad-ass before it was okay for a woman to be a bad-ass?  I certainly thought so back in the day.

So having watched a few people light their reputations up like it was a Swisher Sweets cigar recently…it got me thinking.  How many of us actually put a dollar value on our reputation?  I mean yes, if you were to stop 100 people on the street and ask them whether having a good reputation is important, 99 would probably say yes.  (There is always one nutter in the crowd).  But how many of us actually know what setting our reputation on fire would cost us, in real dollars and cents terms?

That question sent me off to the Wizard of Oz, alternatively known as Google.  Turns out that some lucky professor behind some windowless ivy covered wall somewhere, still has the opportunity to produce a long and laborious paper on the correlation between reputational suicide and financial loss.  Said another way, Google didn’t provide me the E=MC2 for reputation.  But I did stumble on two areas that may help us all at least put some dinero to what our reputation is worth.

The first is the concept of defamation.  Meaning, in the event that someone said (or wrote) something so bad about you or your company, which prevented you from working or forced your company out of business, how much would that hurt your pocketbook (or Venmo account depending on your age).  To me, defamation is an excellent proxy.  It’s still your reputation that we are talking about here.  The only difference is rather than, as Eddie Murphy says in Raw, “You brought that shit on yourself”, it’s someone else doing it to you.  But that aside, in both cases, the damage is done and the reputation and the dollars are lost.

In an article titled “The Economics of Weaponized Defamation Lawsuits” (what a great friggin’ title…wish I came up with that one), the author says, “The law of defamation is the principal legal mechanism in both the United States and England for protecting the interest in reputation.”   AllLaw.com goes on to say, “With respect to losses to the plaintiff’s business or profession, the damages suffered are usually measured by the difference between the plaintiff’s actual earnings and the plaintiff’s projected earnings, but for the defendant’s actions.”  It also says “Generally, there are three types of damages in a defamation case: (1) actual damages, (2) assumed damages, and (3) punitive damages.”  So now we have a framework.  Basically, figure out the net present value of what you would have made for the rest of your career if you hadn’t napalmed your reputation, then compare it to your new lesser self and you have the answer.

I googled “biggest defamation cases” and one that came back on the Cornerstone.com website was the case of BPI vs. ABC News in 2012.  The site says “Beef Products Inc. (BPI) claimed $1.9 billion in damages in response to ABC News’ prime-time broadcasts about BPI’s lean finely textured beef (LFTB) product… BPI claimed that ABC News engaged in a disinformation campaign and repeatedly described LFTB as “pink slime,” and as a filler, that was approved over the objections of USDA scientists. In the wake of the broadcasts, BPI’s sales of LFTB dropped dramatically. The firm closed three of its four manufacturing plants and laid off about 700 workers…Counsel for BPI retained Cornerstone Research and Professor Ran Kivetz of Columbia University, Professor Kim Neuendorf of Cleveland State University, and Professor Daniel Sumner of the University of California, Davis, to assess causation, damages, and media content issues.”  Spoiler alert.  According to the website, these three prof’s nailed defamation and related damages.  Sounds like ABC coughed over $1.9B according to the website.  If I had more time, I would fact check that against ABC’s annual report.  Second spoiler alert.  I’m not eating LFTB anytime soon.

Okay Johnsen, my coffee is getting cold.  Gotcha.  I’ll make it quick.  Besides figuring out what your reputation is worth by running a defamation case against yourself, the other way to frame it up is, case study.  Given that it’s Oscar night as I pen this, thought it would be fun to give you these two.

Exhibit A.  Harvey Weinstein.  His net worth went from $300MM to $50MM from the moment he was accused of sexual abuse to January of this year.  Hard to say that his sinking reputation and net worth didn’t move in lock step.  (I am surprised to learn that he is still worth $50MM.  My guess, that’s sitting in the Caymans or Missouri.  (wealthygorilla.com: Harvey Weinstein’s Net Worth))

Exhibit B.  Mel Gibson.  The guy crushes it with “The Passion”, and then blows himself sky high in 2006.  He then barely works for the next 10 years (arguably it could have been the most productive decade of his life) and finally somewhat digs out in 2017 with “Hacksaw Ridge”.  Hard to say how much he damaged himself by damaging his reputation, but my guess is you could find an econometric expert to show that its north of $500MM.  Oh, and by the way, his fallen reputation also cost him a divorce, which is widely estimated at $425MM.  Was it worth it Mel?

And just because I am always trying to get you to spit your coffee all over your desk, here is a direct quote from Mr. Weinstein:

“I wanted to do something inspirational for my children.”