“Beam me up, Scotty”! AT&T makes Holoportation a Reality in Dallas

The future of telecommunications

By OOH TODAY believes all voices, not just the loudest, must be heard Last updated Aug 28, 2022
0 185
Share
For the very first time, the Proto M was utilized in public, presenting lifelike, 4K volumetric content for the AT&T Evolución Lounge in Dallas. Proto Inc. is the innovator of the fastest growing plug-and-play, self-contained holoportation device on earth. The Tim Draper-backed startup has been recognized with innovation awards from CES, SXSW and Fast Company. The Proto M is the 25” tall version of the 7’ tall Epic, which is in use globally by top financial institutions, entertainment companies and Fortune 500 companies. 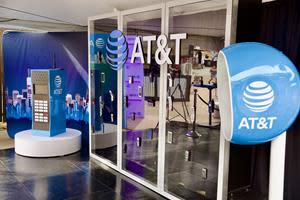 At AT&T’s Evolución Lounge, visitors were able to experience the history of mobile phones in a series of spinning holograms produced by Proto for the M, all set in a 70s-style vintage pay phone shell. The AT&T Evolución Lounge was at the Dos Equis Pavillion during the UFORIA LATINO MIX LIVE concert on August 4 which featured Latin music artists Ricky Martin, Becky G, Arcángel, and Jhayco.
For the activation, Proto presented mobile communication devices spanning 1995 to the present day standard smart phone – the unspoken message being that Proto and holograms are rapidly becoming the next dimension in telecommunications.
AT&T was an early adopter of Proto’s technology, having installed a Proto Epic in May 2021 at the AT&T Perch at Mercedes Benz Stadium in Atlanta to allow fans to engage with Atlanta Falcons and Atlanta United FC players during games, and subsequently using it at that year’s Major League Soccer All-Star Game at Banc of California Stadium in Los Angeles.

“It’s thrilling to see the Proto M step out into the real world,” said Proto Inc. Inventor and Founder David Nussbaum. “This activation is especially meaningful because it ties Proto to both the history and the future of telecommunications. We’re so proud that this first outing is with AT&T and CAA.”
The activation at the UFORIA LATINO MIX LIVE event continued Proto’s work with artists such as Romeo Santos, Migos, Kane Brown, Walker Hayes, and Sean “Diddy” Combs and other stars such as Ellen DeGeneres, Logan Paul, Howie Mandel, Usain Bolt and Lewis Hamilton.
The Proto M will be released in enterprise and consumer editions later this year.
Photo credit: © 2022 AT&T Intellectual Property. All rights reserved.
About Proto Inc.
Proto, formerly known as Portl, is the award-winning creator and leading provider of the hardware and software that make holoportation a reality. With units deployed globally, the company is beaming people, brands and digital assets worldwide. Proto has become the fastest growing communications & marketing solution in retail, hospitality, entertainment, healthcare, education, financial services, tech and the arts. Proto recently won the top prize at SXSW for “Connecting People,” was a 3X honoree at CES 2022 and was named to Fast Company’s Most Innovative Companies list. Proto is a venture-backed company based in Los Angeles with  showrooms and distributors in New York, San Francisco, Las Vegas, Columbus, Ohio, Toronto, London, Paris, Taipei and Seoul. More info at Protohologram.com

MSS Media Partners With Amazon For ‘On Campus’ Campaign