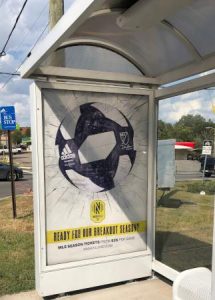 Nashville, Tennessee – In what has been hailed as one of the most successful first games of any professional soccer franchisee in America, The Nashville Soccer Club of MLS attracted over 59,000 fans to Nashville’s NFL Nissan Stadium for the Club’s introductory outing.

The campaign, created by Buntin Out-of-Home Media, that launched the highly successful opening was out-of-home driven featuring roadside digital, bulletins, posters, transit shelters and social media. Digital bulletins used a ten day count down to the season opener. One of the creative executions was an inflatable 15-foot soccer ball mounted on a bulletin structure, strategically located in proximity to the stadium. In addition to highlighting the season opener, the campaign spearheaded advance season ticket sales. A total of 60,388,960 impressions were registered in the six-week flight. Plans are underway to extend the use of out-of-home as the new Nashville Soccer Stadium, now under construction, progresses.

Commenting on the success of the campaign, Jon Carmack, Executive Vice President of Buntin Out-of-Home Media, said: “The use of out-of-home allowed us to utilize our GeoTrak World™ planning system to precisely target high potential soccer fans. The use of out-of-home produced a greater return on investment and optimized reach and frequency.” Buntin Out-of-Home Media was founded in 1987 and today has more than 5,000 facings under contract for leading national brands.   http://buntinoutofhome.com

The Top OOH Operators Making the Miami Market —Who’s No. 1?