4 Reasons Autonomous Cars are the Nemesis to OOH

I fear, as we know it today.  It is not a predicted outcome anyone in the Outdoor Advertising Industry would like to see. It’s the last thing I want, as we own a handful of traditional inventory. There is no other financial investment or business which would return as much personal gain as our little billboard plant. Nevertheless, it is my opinion autonomous cars would cast a dark cloud on vehicular related OOH.

The reasons are anecdotal but hear me out.
I believe the threat is real because of the fast rise and acceptance of four distinct events and technologies.

Here is my take.

Speaking to my personal experiences and those shared by others in the OOH business regarding ride sharing.  We no longer rent a car in out-of-town travel, ride share has become the rule and not the exception. My typical days traveling, from ad agency to ad agency making sales calls, now I find myself spending the entire time of every trip, with my head down texting and responding to emails.

An epiphany came when an OOH friend phoned me while waiting in LAX at the end of a 3 day work week. Having completed 11 face to face calls, zig zagging the LA Metro with my trusted Uber drivers. The routes took us to stops in Santa Monica, to Playa Vista, to Sherman Oaks, downtown to Wilshire, then on to Grosvenor and many more.

My friend asked me, “Tell me what the LA billboard market was like in your travels.”  Then it HIT ME!  I did not see one billboard.  It wasn’t because we didn’t drive by any.  I’ve made the trip before, driving a rental, traveling the same routes, with my head swiveling like an owl on speed, taking photos, making notes, catching every glimpse of every OOH location. But not this trip. I did not see one face.  Remember, I am as hard-core of OOH person as anyone, but I stayed buried in my last call, preparing for the next and reporting along the way. Never looking up until the destination was reached.

If I am not looking out of the car, why would I believe the average John or Jane would be?  They game and watch movies on their personal screens. I have never. Side note: Chance to catch up on sleep?  All studies show a sleep deprived nation.  Check out the video.  Note the 1:20 mark of the video.

The technology is nearly here, where a vehicle’s windows could be the new personal touch screen. We already have touch screens on the dash.  Some vehicles have wifi.  When autonomous vehicles are fully engaged, i.e. safe and operational with critical mass, every window will be too.

Eventually, every window in the vehicle will become an interior screen which would carry different ‘channels’ for passengers. The back seat side window for junior’s “PlayerUnknown’s Battlegrounds” video game. Fox and ESPN for Dad. Maybe HGTV for Mom (I love Chip & Joanna, FYI, they’re pregnant and expecting their fifth). Face time for big sister and the boyfriend back home, and all the while, a full length movie running on the full front windshield.  You prefer to see the scenery?  Just ask Siri for ‘ocean view drive’.

Hey, we are already glued to the small screens now, why not the transference?

I have never been, but may friends and business associates who have, report of Asian cities like Bangkok, where drivers may sit in traffic for hours upon hours in bumper to bumper traffic commonly have multiple screens in their cars. Including smart phones and the telling device, is the  larger monitor TV sized screens to watch streaming video. The traffic moves so slowly, there is no fear of accidents. Given the choice without autonomous vehicles many of the world’s citizens are already scorning the outside world while driving.

Here’s the next troubling thought. General Motors, Ford, Honda, will be the new OOH owners and sellers. The automakers will own and sell the window space whether ads or entertainment.  Perhaps Netflix doesn’t buy Regency Outdoor,  instead, they make a major investment in Toyota. Watch Wall Street for any suspicious entertainment and automotive plays.

My fear, is billboards, at least traditional streetside inventory, including digital, will become obsolete. Next time the hype for autonomous vehicles comes up?  Stay off the bandwagon.  We don’t want it.  As for me, I am done with ride sharing. It’s the domino effect.  Back to rentals.

What do you think? Are Autonomous Cars the nemesis to OOH?

For those who may agree with my observations, do not sell your OOH stock just yet. 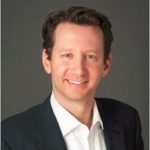 Mark Boidman, Partner and Managing Director at PJ SOLOMON, say’s, “autonomous cars are NOT an impending OOH Industry headwind”. At least not yet.  He did open the door by mentioning ‘impending headwind’.

See his graphic below. Boidman and Solomon know data and forecast the future. The good news is, it’s 25 plus years before autonomous cars gain any mass use.  If you are reading this and you are age 30 plus, don’t worry,  Solomon is projecting a timeline into the 2050’s.

As for me, I like the dough my little OOH plant generates.  Long live OOH! 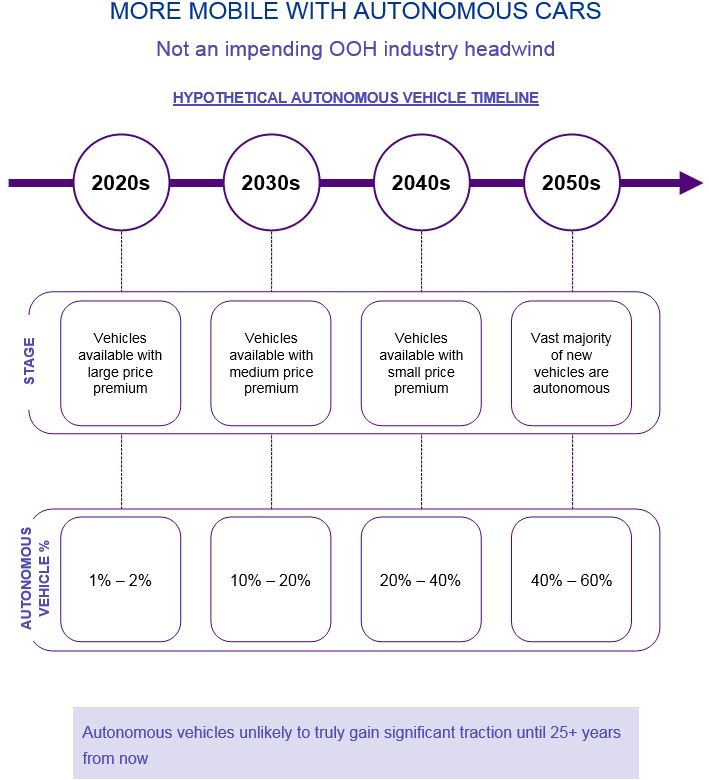 Will autonomous vehicles provide the next screens for publishers and advertisers?

A Driverless Future Pros and Cons