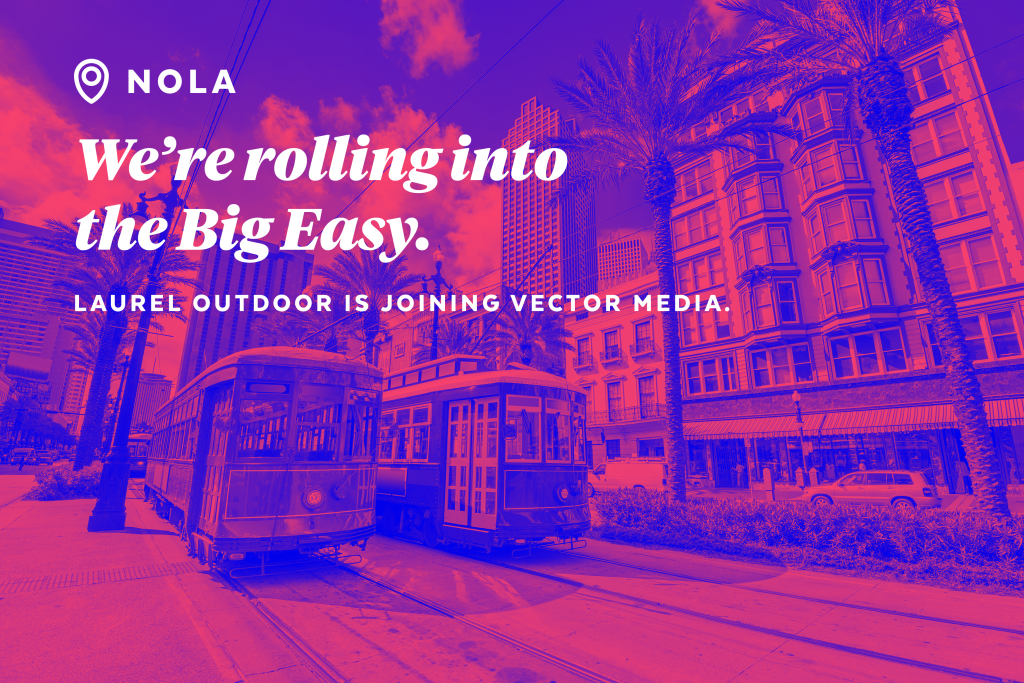 NEW YORK (May 1, 2019) – Vector Media, an innovative media company specializing in transit media, traditional Out-of-Home (OOH) media and the creation of interactive brand experiences, today announced the acquisition of Laurel Outdoor, the exclusive municipal transit advertising partner of the city of New Orleans, Jefferson Parish and St. Bernard Parish, operating all bus and bus shelter inventory in Orleans and Jefferson Parish as well as bus benches and bus shelters in St. Bernard Parish. Through the acquisition, Vector will add over 160 buses, 60 streetcars (the historic St. Charles and Riverfront/Canal streetcars), and approximately 640 bus shelters panels to its rapidly growing inventory.  Additionally, Laurel is in the process of building an additional 50 shelter locations consisting of 100 new shelter ad panels. The acquisition is another bold step for Vector who, in just two years, has added 35 transit markets to its portfolio (now 55 markets in total) and has nearly doubled in size to become one of the largest out-of-home media companies in the United States.

Laurel was founded in 2000 and has grown consistently and significantly within the New Orleans market over the past 19 years. Laurel founder, Dana Pecoraro, will continue to play an important role in the combined company’s efforts.

“Both Laurel and the City of New Orleans are a perfect fit for the Vector platform due to its cultural significance, booming tourism business and diverse population,” said Marc Borzykowski, Chief Executive Officer of Vector Media. “Having graduated from Tulane University, I have a special appreciation for New Orleans and its residents, and it’s a wonderful feeling to come back professionally to a city that I once called home.”  “Even more importantly, Dana is a true force, a wonderful leader and she has done a incredible job growing Laurel to where it is today. We are confident that Vector’s innovative approach to transit advertising, combined with Dana’s market experience and reputation for excellence, will be a perfect marriage, and I’m excited to see this program continue to blossom in the coming years.”

Laurel’s CEO Dana Pecoraro adds, “In Vector Media, we found an out of home company that mirrored our drive for excellence and our desire to be the best possible provider for our municipal partners. Vector’s management team is an excellent complement to our efforts to serve the New Orleans metro area.”