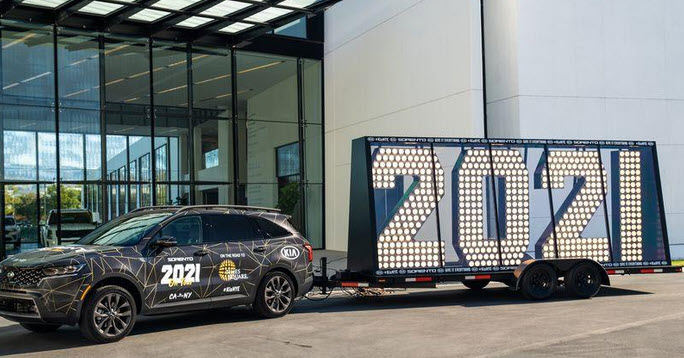 Who’s going to be at Times Square for the
New Year’s Eve Count Down?

New York, NY  – After a long year of uncertainty, New Tradition is proud to be an integral part of bringing everyone an event that unifies us all and is uniquely accessible to all – a virtual New Year’s Eve featuring 2021’s Exclusive Countdown Sponsor, Kia Motors America. This exclusive partnership has launched an eye-catching activation that’s never been done before to build excitement about the countdown to 2021 and Kia’s all-new 2021 Sorento.

Kia and the new 2021 Sorento are featured on New Tradition’s digital spectaculars on One Times Square’s north facing façade – live now through February 2021 and will include Kia’s Countdown Sponsorship content for the big night on December 31st.

“We’re always excited for New Year’s Eve at One Times Square, and we’re even more excited this year to have Kia Motors America as our exclusive Countdown Sponsor,” said Vince Mastria, Chief Revenue Officer and Partner of New Tradition. Executive Vice President of Sales at New Tradition, Maegan Pussilano added, “The collaborative effort amongst all involved has been phenomenal. Thanks to all of our partners, this will be a positively memorable and meaningful New Year’s Eve event. We’re excited to ring in 2021 with Kia and the rest of the world.”

The all-new Kia Sorento has kicked off the New Year Countdown by touring One Times Square’s ‘2021’ illuminated numerals across America – known as the “2021 Sorento on Tour.” The 2021 Sorento tour launched from Kia’s American headquarters in Irvine, CA and will arrive in New York City’s Times Square on December 21st, where the Sorento and ‘2021’ numerals will be featured in a press event and remain on display until December 23rd for socially safe distant viewing.

“Times Square New Year’s Eve Countdown Sponsorship provides Kia with an important extension of our commitment to honor the frontline workers of 2020 and spread good cheer. We’re thrilled to bring a first-to-market opportunity across America with the Kia Sorento touring the New Year numerals ‘2021’ and to be the Countdown Sponsor of a global event,” said Russell Wager, director, marketing operations at Kia Motors America.

The 2021 Sorento tour includes stops at select Kia dealerships in notable DMAs like Los Angeles, Las Vegas, Atlanta, Miami and the Washington, D.C area – all of which are some of New Tradition’s largest out-of-home markets, offering static and digital advertising spectaculars. This collaborative and first of its kind road trip across America is also a result of the efforts from Jamestown, Times Square Alliance and Countdown Entertainment; all whom make the world-renowned Times Square New Year’s Eve celebratory event possible year after year.

The 2021 Kia Sorento will end its coast-to-coast road trip at Jamestown’s iconic One Times Square in New York City where the ‘2021’ numerals will be affixed atop the façade in time for the NEW TRADITION AND KIA MOTORS AMERICA TOUR 2021 NUMERALS CROSS COUNTRY TO ONE TIMES SQUARE IN COUNTING DOWN TO NEW YEARS EVE Ball Drop at midnight on December 31st, and where they will remain illuminated for all of 2021.

From December 21st to 23rd, the ‘2021’ numerals will be on display (and remain affixed to the
2021 Sorento) in Times Square with New Tradition’s digital spectaculars showcasing Sorento’s
new advertising campaign in the backdrop.

Times Square New Year’s Eve on December 31, 2021 is a broadcast event and is not open to the
public. However, to follow the 2021 Sorento on Tour check out #KiaNYE #BallDrop #OneTimesSquare on social media.

About New Tradition
Founded in 2010, New Tradition is one of the fastest-growing Out-Of-Home media companies in
the United States as well as one of the largest independent operators of large format digital and
static signage. This includes signage in New York, Los Angeles, Boston, Nashville, Miami, San Antonio, San Francisco, Seattle, Portland, Washington DC and Las Vegas. Visit http://www.NewTradition.com

About Kia Motors America
Headquartered in Irvine, California, Kia Motors America continues to top quality surveys and is
recognized as one of the 100 Best Global Brands. Kia serves as the “Official Automotive Partner”
of the NBA and offers a complete range of vehicles sold through a network of more than 750
dealers in the U.S., including cars and SUVs proudly assembled in West Point, Georgia.*
Visit http://www.kiamedia.com

Santa’s biggest question: Have you been naughty or nice?