How an OOH Company Thanks a 20 Yr Employee

do it outdoors media Rewards Employee with Brand New Lincoln

This is an absolute feel good story about an OOH company rewarding one of its employees with a car. This is not a sales person who requires one for travel or an ops person who would use a pickup for company business.  And the car?  It’s not a Nissan Versa S Sedan: $12,780 or Chevrolet Spark LS is $12,995.

This 20 year loyal employee, who is the companies routing coordinator, was rewarded with a Lincoln Continental!

How many people reading this, have heard of anyone in OOH receiving a free car from their company?  Sure, I have heard of sales people given a lease car paid by the company in a sales competition because of the amount of revenue they generated.  Still, nearly unheard of, yet so refreshing that companies in OOH exist, who put their appreciation where there wallets are with something as exciting as a luxury auto. Well done Regis and David. do it outdoors

Congratulations to Diane Utz, the first employee of do it outdoors media.
For up close and personal story click on the videos below.

York, PA-based do it outdoors media surprised their most veteran employee, Diane Utz, with a new car as part of the company’s 20th anniversary celebration

YORK, PA – For Immediate Release – Diane Utz was the first employee David Pridgen and Regis Maher hired when they started their company twenty years ago. In an attempt to reward her dedication and longevity with the company, her hard work and her positive outlook, today, they surprised her with a brand new Lincoln vehicle. 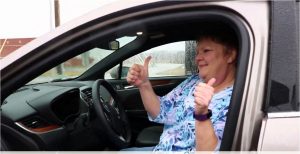 “Diane has always wanted a Lincoln,” says Regis Maher, President and Co-founder of do it outdoors media. “We used to joke, ‘If you can stick it out with us for twenty years, we’ll get you a Lincoln!’”

The owners stayed true to their long-running promise.“

To reward Diane with a Lincoln probably isn’t even enough to say thank you for all she has done throughout our company’s history,” says David Pridgen, CEO and Co-founder. “She was with us from our very humble beginnings – and has stuck with us through our growth and evolution.”

do it outdoors media, today, is the largest national mobile billboard and field marketing company. But it got its start in 1997 with just a few mobile billboard vehicles. The company sold its first campaign ever to New Era Cap during the 1997 World Series of baseball, targeting the sporting events in Miami. Twenty years later, it has driven advertisements for many of America’s best-loved brands, including: Pepsi, Comcast, Sprint, Under Armour, Allstate, Coors Light and Facebook, to name a few.

Utz is the company’s routing coordinator. This means she is responsible for ensuring each mobile billboard campaign has a strategic and customized route in place to maximize reach and frequency for the advertiser’s message and to achieve the campaign’s objectives. Twenty years ago when she joined the company, she primarily used paper maps. Today, she leverages sophisticated mapping software to create even smarter routes, which the drivers can access directly from a tablet within the mobile billboard unit.

While there has been a lot of change for do it outdoors media throughout the years, one thing has been constant: Diane. Her strong work ethic and passionate dedication are commendable.

During the company’s annual week-long staff meeting, Maher and Pridgen rewarded her longevity with a new car. They unveiled the surprise – using one of their large mobile billboards – in front of the company’s entire corporate team, who were visiting York from across the country.

If you have a similar story.  Please drop us note at BillBoard@OOHToday.com

We Know Who is Buying OOH

Over the River with Burkhart Outdoor