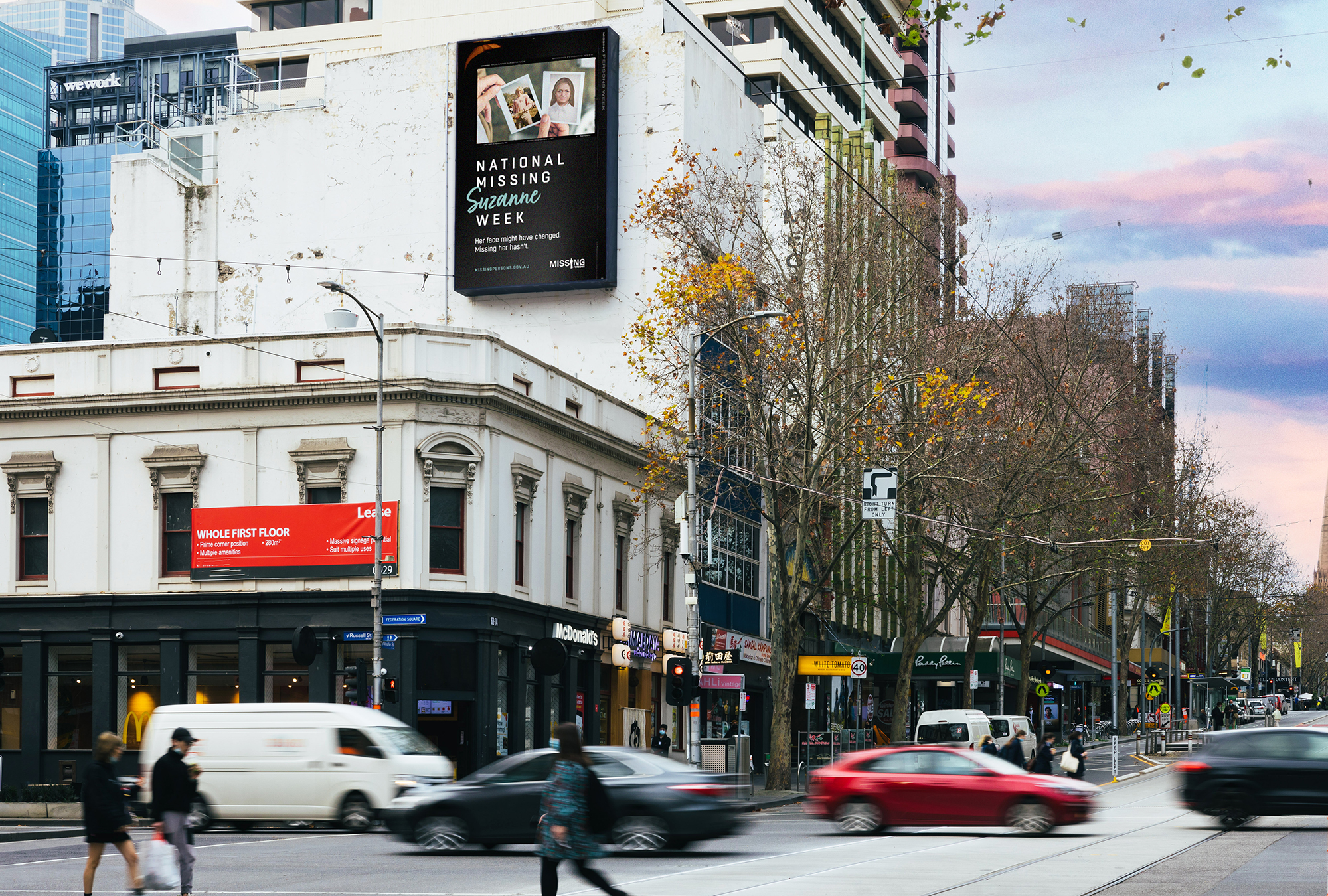 ‘Their face might have changed. Missing them hasn’t’ is the theme of this year’s Outdoor Missing Persons campaign

This week, Out of Home signs across Australia will feature and profile missing people as part of National Missing Persons Week (NMPW), from Sunday 1 August to Saturday 7 August.

The campaign will help raise awareness of long-term missing Australians and the impact missingness has on their families.

The 2021 campaign marks the thirteenth year the Outdoor industry has sponsored NMPW in New South Wales, and the seventh year it has run nationally, in partnership with the Australian Federal Police (AFP).

“With more than $10 million of advertising space donated by OMA members over more than a decade, this campaign is our industry’s longest standing community partnership. We truly value our relationship with the Australian Federal Police as we can use the power of our signs’ wide reach to hopefully help find the loved ones for families of missing people,” said OMA CEO Charmaine Moldrich.

“This long-term partnership highlights Out of Home advertising’s unique position with signs in and among places where masses of people frequent. Our signs are paramount in raising community awareness for campaigns like National Missing Persons Week because we can quickly broadcast critical information to a broad audience nationwide. We hope that this year’s campaign which uses age progression images of the featured missing people will assist in bringing them home,” continued Moldrich.

In 2020, the National Missing Persons Coordination Centre (NMPCC) recorded over 140 missing persons reports per day, totaling more than 51,000 reports that year. Over 98 per cent of these people are eventually located, which is why the focus of the NMPCC is on the 2 per cent of people who are still missing for three months or more.

The Police are using age progression technology to focus on changes that occur to a person’s appearance over time. “When someone has been missing for a decade or more, we acknowledge that their appearance would naturally have changed from the last photograph their family has of them. This technology helps us develop an image that simulates what the missing person could look like today. The AFP Forensic artists use their specialist skills to create the new image, whilst working closely with the families to ensure genetic factors are strongly considered,” said Jodie McEwan, Coordinator NMPCC.

“We want to highlight to the community that despite the length of time that has passed since our missing persons were last seen, our work in trying to find them does not stop. Our theme for this year’s police campaign reflects this with the message Their faces might have changed. Missing them hasn’t. This also recognizes the ongoing pain that families endure when a loved one remains missing,” continued Jodie McEwan.

“The Outdoor Media Association and its members provide such a vital contribution to not only the NMPW police campaign, but to the families and friends of long-term missing persons. Through their generous donations each year, we reach millions of Australians with this important message,” said Jodie McEwan.

*The total estimated media value will be confirmed at the end of the campaign.