The Body Shop North America announces continued efforts in supporting 2SLGBTQ+ youth amidst a devastating legislative cycle and uptick in discrimination. In the United States, the Parental Rights in Education Bill, coined as the ‘Don’t Say Gay’ bill by the media, recently passed in Florida, and now, copycat bills that threaten the protection and privacy of 2SLGBTQ+ students and educators are on the rise in other conservative states like Texas and Tennessee.

In response, the activist beauty retailer is launching a pro-2SLGBTQ+ creative campaign that directly opposes this legislation. The campaign will be brought to life through retail signage, digital initiatives, an educational hub, non-profit partnerships, and dedicated product sales. 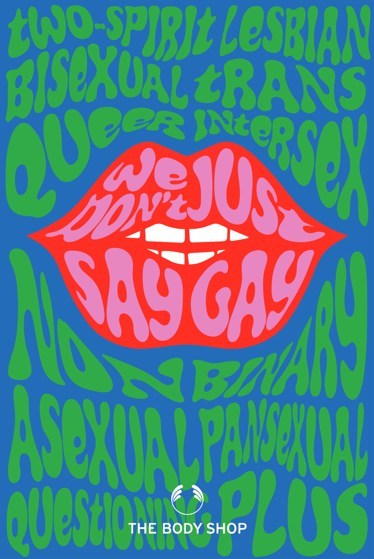 Starting June 1, visitors to the brand’s North American stores will see bold, colorful signage, videos, and specially designed apparel worn by retail staff including bandanas and pins that will read “We don’t just say gay. We also say…” followed by the list of 2SLGBTQ+ identifiers, including “pansexual,” “bisexual,” and “trans,” among others, meant to capture the sentiment “we say it all” for, and in solidarity with, the 2SLGBTQ+ community. The Body Shop will also be putting up outdoor advertising in key locations on building walls, outside cafes, and in other high-traffic areas in city centers, calling for the passing of the Equality Act.

“Our priority this Pride, and always, is to keep working toward a world where 2SLGBTQ+ youth feel safe, supported, and able to show up as they are,” said Hilary Lloyd, VP of Marketing and Corporate Responsibility for The Body Shop North America. “We hope this unapologetic campaign speaks truth to power and helps our 2SLGBTQ+ customers and allies to feel at home with The Body Shop.”

Stores across North America will also be equipped with informational tables and QR codes that lead customers to The Body Shop’s digital Pride Hub, which will include educational resources and a petition hosted by the brand’s charitable partners, which are Advocates for Youth in the US and It Gets Better Canada.

In the US, the Pride Hub petition is encouraging customers to support 2SLGBTQ+ youth by telling Congress to pass the Equality Act. The petition will allow customers to automatically generate a letter to their senator urging support of the bill, which is widely considered to be the single-most important piece of federal legislation for safeguarding 2SLGBTQ+ rights.

In Canada, the petition is asking customers to sign It Gets Better Canada’s pledge to commit to speaking out against intolerance and hate.

“Young 2SLGBTQ+ people are facing attacks on our bodily autonomy and rights,” said Sydney Greene, Manager of Digital Content and Strategy, Advocates for Youth. “It is vitally important for companies, organizations, and people showing up to Pride this year to do everything they can to pass the Equality Act, which will provide protections for the queer and trans youth who are under attack in many parts of the United States right now.”

The Body Shop also recently launched an “Out for Love” highlighter makeup range in three different shades. From May 31st through August 31st, $1 of every sale will benefit It Gets Better Canada and Advocates for Youth in the US, up to $10,000 for each organization.

“We are proud to collaborate with The Body Shop this year to inspire a better future for all, by working towards creating opportunities that elevate hope, resilience, and determination for 2SLGBTQ+ youth,” said Omid Razavi, Executive Director at It Gets Better Canada.

This Pride campaign is a continuation of The Body Shop’s advocacy for 2SLGBTQ+ rights. Last year in the US, the retailer galvanized thousands of customers to send letters to Senators supporting the Equality Act and garnered $35,000 in donations for the Equality Federation, a grassroots organization that builds state-based power for 2SLGBTQ+ people and policies. Last year in Canada, The Body Shop joined the All Blood Is Equal coalition to campaign for ending Canada’s discriminatory blood ban, which eliminated potential donors based on sexual orientation and gender identity. In April of this year, Canadian Blood Services announced that it would move to end the policy.

ABOUT THE BODY SHOP INTERNATIONAL
Founded in 1976 in Brighton, England, by Dame Anita Roddick, The Body Shop is a global beauty brand and a certified B Corp™. The Body Shop seeks to make positive change in the world by offering high-quality, naturally inspired skincare, body care, hair care and make-up produced ethically and sustainably. Having pioneered the philosophy that business can be a force for good, this ethos is still the brand’s driving force. The Body Shop operates about 3,000 retail locations in more than 70 countries.

ABOUT ADVOCATES FOR YOUTH
Advocates for Youth is a 501(c)3 organization that champions efforts that help young people make informed decisions about their reproductive and sexual health. Advocates boldly advocates for a more positive and realistic approach to adolescent sexual health, focusing its work on young people ages 14-25 in the U.S. and around the globe.

ABOUT IT GETS BETTER CANADA
It Gets Better Canada is a registered charity in Canada that envisions a world where all 2SLGBTQ+ youth are free to live equally and know their worthiness and power as individuals. Its mission is to uplift, empower, and connect 2SLGBTQ+ youth across Canada.