OOH advertising spend data for Q1 of 2021 was recently released by Kantar, and the Geopath team is working to compile this data into a new spending report that will be released soon in the GeekOUT Library.

For today’s GeekOUT Fast Fact, let’s get a sneak peak into some of this data and check out the sixth largest DMA in the country, San Francisco.

Back in November, we compared spending in this market between the first and second quarters of 2020, but for today, we will analyze how spending shifted (or didn’t) between Q4 2020 and Q1 of this year. 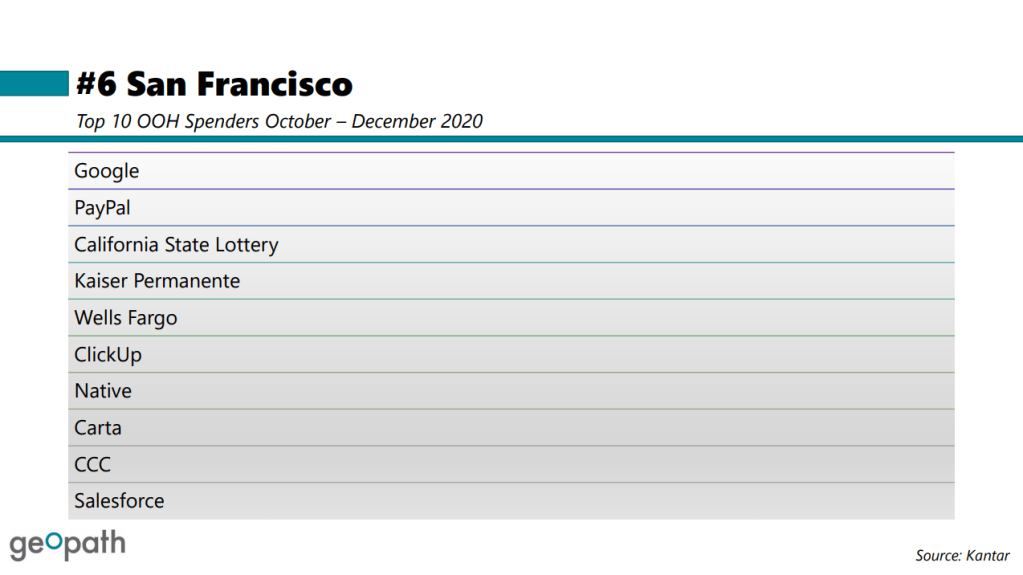 In Q4 of last year, the top spenders in OOH within the Bay Area were mostly computer/software, media, and financial industries, which isn’t that surprising given San Francisco’s proximity to Silicon Valley. It also shouldn’t be that surprising that the list’s top OOH spender is Google, with companies such as PayPal, ClickUp, Carta, and Salesforce also holding spots in the top ten.

Now, let’s see if these advertisers continued to spend in 2021. 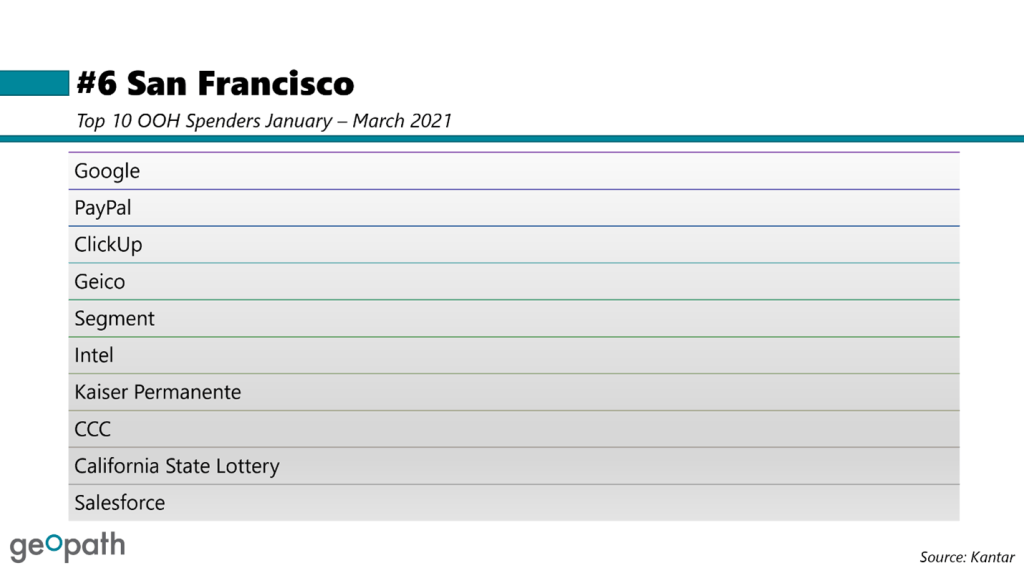 To start, it’s interesting to note that Google spent the most in OOH in both Q4 2020 and again in the first quarter of this year. Looking at previous quarterly reports accessible within the GeekOUT Library, it appears Google has held the top position for the previous five quarters – since Q1 of 2020! Google seems to be taking advantage of the 17,000+ pieces of OOH inventory audited by Geopath in the market, which generate over 1.6 billion weekly impressions!

Similar to Q4, many of the top OOH spenders in the market for Q1 2021 are computer/software companies, with ClickUp, Segment, Intel, and Salesforce holding positions within the top ten. It’s interesting to note that this is the highest concentration of computer/software companies within the top ten OOH spenders list since Q1 of 2020, indicating either a focus on advertising for this industry in 2021, or a return to normalcy!

In 2021, the insurance and government sectors also hold spots, with Geico, Kaiser Permanente, and the California State Lottery holding the fourth, seventh, and ninth spots, respectively. It appears  Geico has continued to spend heavily in OOH, remaining consistent in their OOH from spend from last year, in which the insurance company was within the top ten for 71 other markets in 2020!