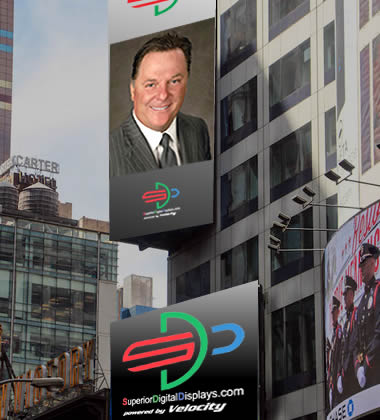 Sad news of the passing of Wally Kelly, this last Thursday, July 11th. He was 62 years old.

Wally Kelly retired after 11 years as Chairman & CEO of CBS Outdoor, (now OUTFRONT Media) in 2015, where he directed all market operations in South America, US, Canada and Mexico.  From 1979 to 1984 he was Sales Manager and VP/National Sales in Chicago for Whiteco Metrocom, Inc. He served on the board of directors for the Outdoor Advertising Association of America where he was elected as Chairman for three years and Geopath (formally Traffic Audit Bureau). Wally received the Myles Standish Award in 2007, which is the highest honor in the industry.

Wally’s love of sports was a constant in his life and in his career. Since lettering (for three years) on the Idaho State football team, he served as a Director on the boards of the College Football Hall of Fame, and on the Fiesta Bowl; as well as on the board of the Idaho State University.

Wally Kelly was the CEO of Superior Digital Displays.

The funeral will be held on Friday, July 19 at 10 AM at St. Theresa’s Catholic Church at 5045 E Thomas Road in Phoenix.  Our sincere condolences to his wife Amy and son, Beau, and all of Wally’s family.

He will be missed.