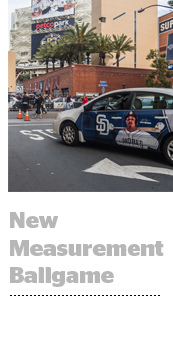 Padres Senior VP and CMO, Wayne Partello, took car wraps for a spin in support of an effort to promote the team signing infielder Manny Machado to a 10-year $300 million contract.

Catching Machado was a big deal for a team with an eight-year losing streak that only won 66 games last year.

As part of the campaign, which ran in the lull between when the Machado contract was signed in February and opening day in late March, Partello ordered a fleet of cars with a giant picture of Manny’s face posted on the side to drive around San Diego.

Who Bought Those ‘Zeke Who?’ Billboards?

For Salespeople in OOH —Cohoot