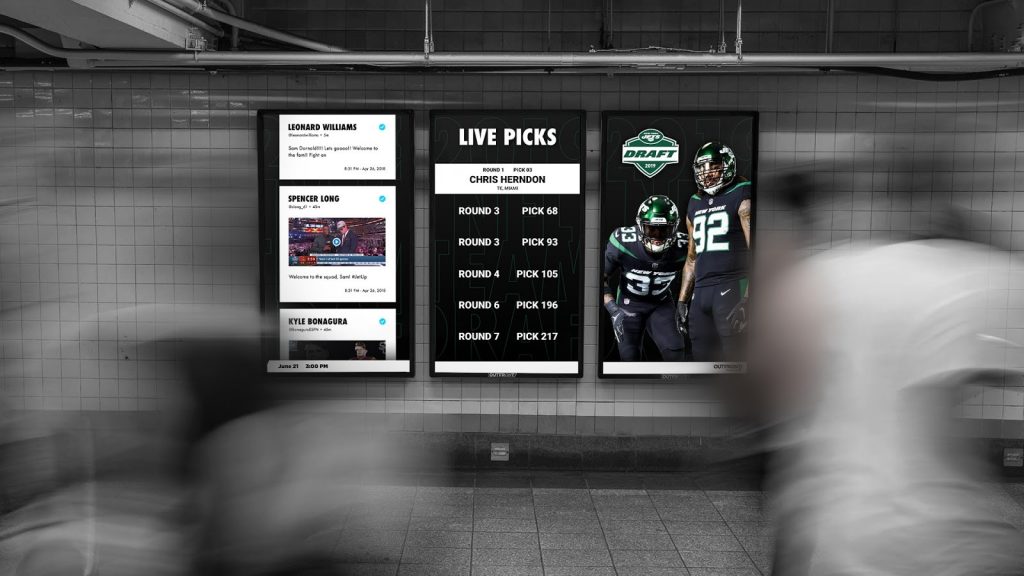 NEW YORK — OUTFRONT Media revealed the New York Jets as the latest partner for its content program, which is designed to earn the attention of subway riders with content that is visually engaging, relevant and of value to the transit audience.

Beginning Thursday, April 25 through Sunday, April 28, OUTFRONT Media showcased the Jets near-real-time picks for the 2019 NFL Draft alongside the Jets Twitter feed on the company’s Liveboard digital displays in subway stations throughout New York City. Prior to the draft, the Liveboards, displayed a countdown to the draft’s start time on Thursday evening.

“Our content program was created to champion the use of out-of-home (OOH) and improve the quality of audiences’ on-the-go experiences with more than just engaging advertising content,” said Jason Kuperman, Chief Product Experience Officer of OUTFRONT Media. “We know New Yorkers are passionate fans of their hometown teams, and our partnership with the New York Jets allows us to keep fans in the loop on the draft as they’re out and about.”

We know New Yorkers are passionate fans of their hometown teams, and our partnership with the New York Jets allows us to keep fans in the loop on the draft as they’re out and about.”

OUTFRONT Media’s content program launched in November 2018 with inaugural partner the Museum of Modern Art. Not limited to New York City, OUTFRONT Media plans to include similar content across its digital network for consumers in metros and towns across the country. OUTFRONT plans to expand the types of curated content categories based on the needs and interests of transit riders.

OUTFRONT leverages the power of technology, location and creativity to connect brands with consumers outside of their homes through one of the largest and most diverse sets of billboard, transit, and mobile assets in North America. Through its ON Smart Media platform, OUTFRONT is implementing digital technology that will fundamentally change the ways advertisers engage audiences on-the-go.