The firestorm started by Nike’s selecting Colin Kaepernick as the face of the ‘Just Do It’ anniversary campaign appears to be quieting. Sides have been chosen and social media has been burning the net. The increase in shoe sales and support seems to have made Nike’s decision a smart one, financially.

According to Millennial Marketing
‘37% of Millennials are willing to purchase a product to support a cause, even if it means paying more.’ Good move by Nike with Kaepernick campaign?  Not sure if that is a question any longer.

Nike loves the attention.
The images of Nike’s in flames help them regain the ‘edginess’ of wearing and owning Nike products. 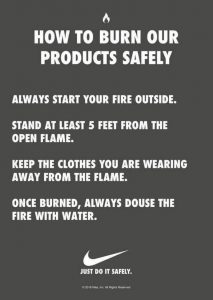 Nike successfully positions themselves as a bold, rebellious brand — not the big, faceless corporation which they are.  Millennials wear more Nike’s. Game to Nike.

From the Streets —September 11 Outdoor Advertising