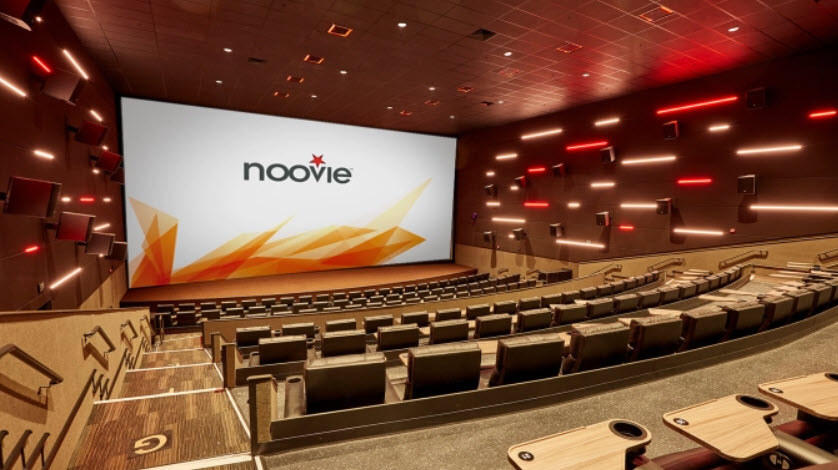 The first convenience store ever to offer ATM services, ( according to their website), 7‑Eleven, connects with National CineMedia (NCM) and ATM.TV bringing movie fans HD Screens Atop FCTI ATMs Located in 7-Eleven® Stores. ATM.TV will show content from NCN’s Noovi entertainment, offering the ability to target digital out of home by daypart.

It’s the fourth partnership the new digital OOH group of National CineMedia has made a pact with. NCN has agreements with Coinstar for a new digital platform atop grocery store kiosks; Captivate, in elevators; and Ziosk, on tables at restaurants including Olive Garden, Yard House, Outback and Red Robin. CEO Tom Lesinksi said he expects the out of home division to produce “meaningful” revenue in 2022.

CENTENNIAL, Colo. & LOS ANGELES– National CineMedia (NCM), the largest cinema advertising network in the U.S., and ATM.TV, a nationwide provider of Digital-Out-Of-Home (DOOH) HD advertising, have united in a new advertising sales relationship that will allow brands to connect with movie fans through HD toppers located on FCTI ATMs at 7-Eleven’s nationwide.

NCM’s new DOOH group, which was created to further unite brands with audiences beyond theaters in a variety of complementary venues, will sell ATM.TV HD out of home media inventory alongside NCM’s Noovie® entertainment content and trivia programming on over 8,500 ATM.TV HD 27” screens.

ability to target by daypart in a large screen format gives advertisers a lot of options for effective campaign targeting.”

“Movie fans are movie fans, whether they’re out shopping or in a theater, and this relationship with ATM.TV allows us to help brands reach and engage with people at a critical moment when they’re in an active shopping mode,” said Steve Sapp, Senior Vice President, Digital Out-of-Home Sales with National CineMedia. “Like movie theaters, 7-Eleven stores are anchors in their neighborhoods – attracting a large, diverse, and valuable group of consumers on a daily basis. ATM.TV’s network ubiquity and ability to target by daypart in a large screen format gives advertisers a lot of options for effective campaign targeting.”

“Convenience stores are essential businesses at the heart of the local community, especially at this time when many people are turning to them for quick shopping trips to avoid crowded supermarkets and big-box stores during the pandemic,” said ATM.TV CEO Daniel Aharonoff. “We’re creating invaluable opportunities for advertisers to reach people while they shop with omni-channel targeting.”

About National CineMedia
National CineMedia  is America’s Movie Network. As the largest cinema advertising network in the U.S., we unite brands with the power of movies and engage movie fans anytime and anywhere. NCM’s Noovie pre-show is presented exclusively in 53 leading national and regional theater circuits including AMC Entertainment Inc., Cinemark Holdings, Inc. and Regal Entertainment Group. NCM’s cinema advertising network offers over 20,400 screens in over 1,650 theaters in 190 Designated Market Areas® (all of the top 50). Visit www.ncm.com and www.noovie.com.

About American Television Media Group, Inc. (ATM.TV)
ATM.TV is a pioneering Digital-Out-Of-Home company specializing in software and hardware for DOOH advertising. To find out more about ATM.TV, visit https://atm.tv.

OOH TODAY believes all voices, not just the loudest, must be heard 3944 posts 552 comments

Trooh will be Measured by Comscore for DOOH Audience Measurement

Delivering Stability to the OOH Industry