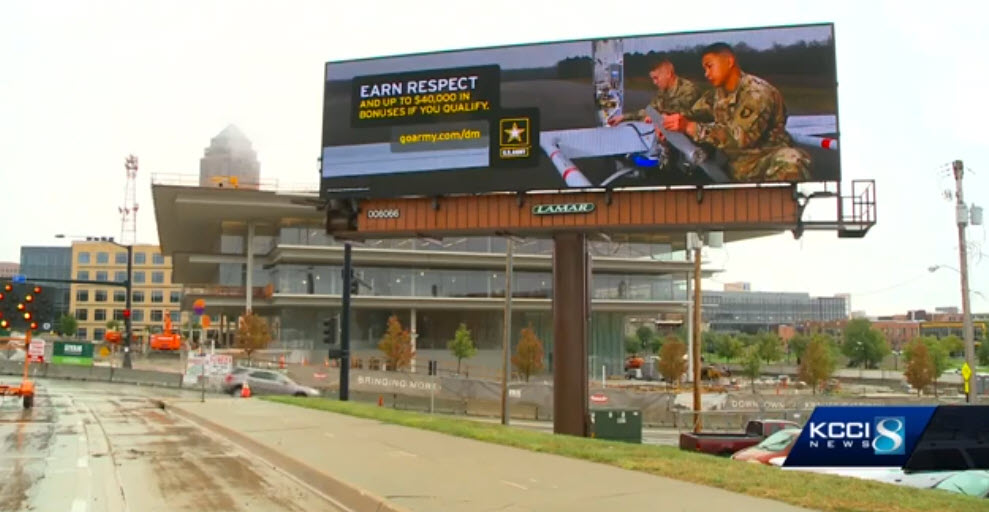 Local artists and Lamar Advertising are at odds over removal of a Digital bulletin in Des Moines. The progress for either side appears to be going slowly.  Lamar is not willing to take the Digital OOH face down.  Property owner Kum & Go, where the billboard is located, is agreeing for removal as well.

Lamar is holding their line, as they should.  If they are not required to remove, do not remove it. You are permitted by law.  Hang in there.  The sentiment for removal should go away with time. There are so many more issues to be concerned about. A billboard is not one of them.

The local activist artist states, “To be fair, the billboard was there before the building was there, but my view is like everything, maybe its time has come to go away.”

“To be fair, the billboard was there before the building was there, but my view is like everything, maybe its time has come to go away,”

What would you do?  Leave up the structure and hold to your rights?  Or do you remove in an effort to appease?

Our experience is hold the line. Remain rigid with regards to removal.  Once perception of a weakness appears, they will continue with even greater efforts for removal of more.

Recall the number one rule in OOH? Always protect the inventory.  Mr. Lamar, Do NOT remove that billboard!

Mr. Lamar, Do NOT remove that billboard!

OOH TODAY believes all voices, not just the loudest, must be heard 3830 posts 550 comments

Everything in America Can be Turned into a Billboard.