It’s an ordinary grocery store delivery truck at first glance, but there’s much more to Meow Wolf Las Vegas’ new mobile billboard than meets the eye. To ensure the advertising for Omega Mart is on par with the creativity and innovation flowing throughout the sprawling exhibition, located inside of AREA15, Meow Wolf has created an iconic mobile billboard in collaboration with Company 8 Ad Group and Kre8 Media Outdoor Advertising that is now turning heads on the world-famous Las Vegas Strip and making appearances at community events across the city.

Recently announced, the iconic mobile billboard received the Out of Home Advertising Association of America’s (OAAA) OBIE Gold Award for Transit, as well as the OAAA OBIE Silver Awards for Entertainment & Live Events and for Custom Installation. The OBIE Awards are the most prestigious honors for creative excellence in out of home advertising design.

“Meow Wolf is all about flipping the script and presenting new ways of thinking and doing while exploring the boundaryless possibilities of creativity. Our goal with this mobile billboard was to do just that,” said Drew DiCostanzo, Director of Sales & Marketing at Meow Wolf Las Vegas. “We wanted to find a way to capture the energy of the Omega Mart experience in a fun and playful way while staying true to the brand. In doing so, we were able to give glimpses of some of the artwork you can experience at Omega Mart and include some really impressive technology and interactive elements.” 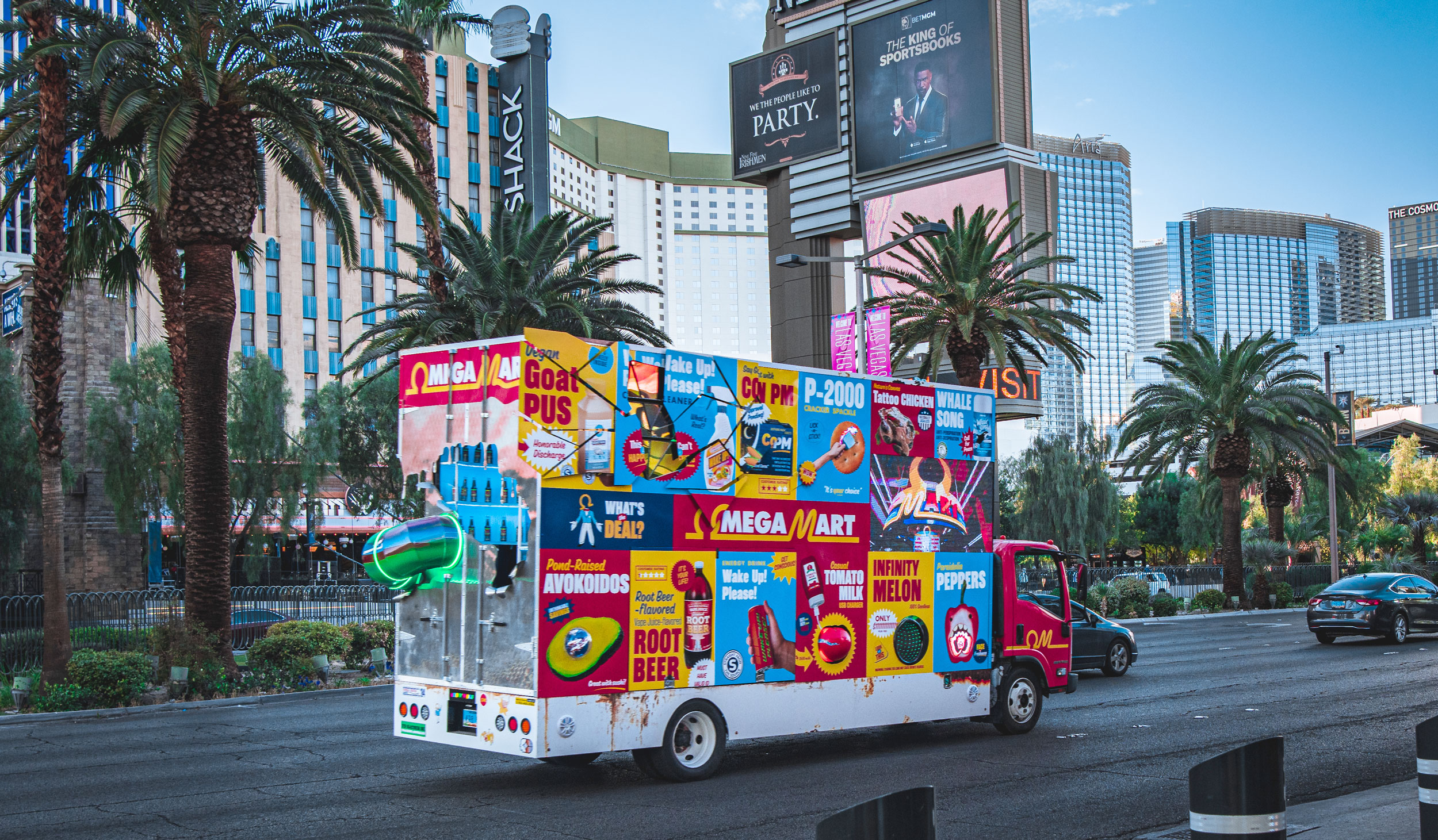 With design and project management overseen by Company 8 in collaboration with Meow Wolf and production facilitated by Kre8 Media, Omega Mart’s iconic mobile billboard features several unique elements that make it a must-see-to-believe advertising force on The Strip. Some of the elements that make the mobile billboard as exceptional as Omega Mart’s selection in free-range produce include:

The iconic mobile billboard also features a secret Easter egg! The truck’s “How’s My Driving?” sticker, located on the front left panel, leads callers to the official Omega Mart hotline which features multiple pre-recorded messages for each of the store’s exceptional departments and a special address from Omega Mart founder Walter Dram. Much like the many clues and prompts hidden throughout the exhibition’s installations, phone lines and computer stations, the truck’s hotline number is another way to unlock surprises and exclusive information about Meow Wolf’s narrative-driven experience inside of Omega Mart. 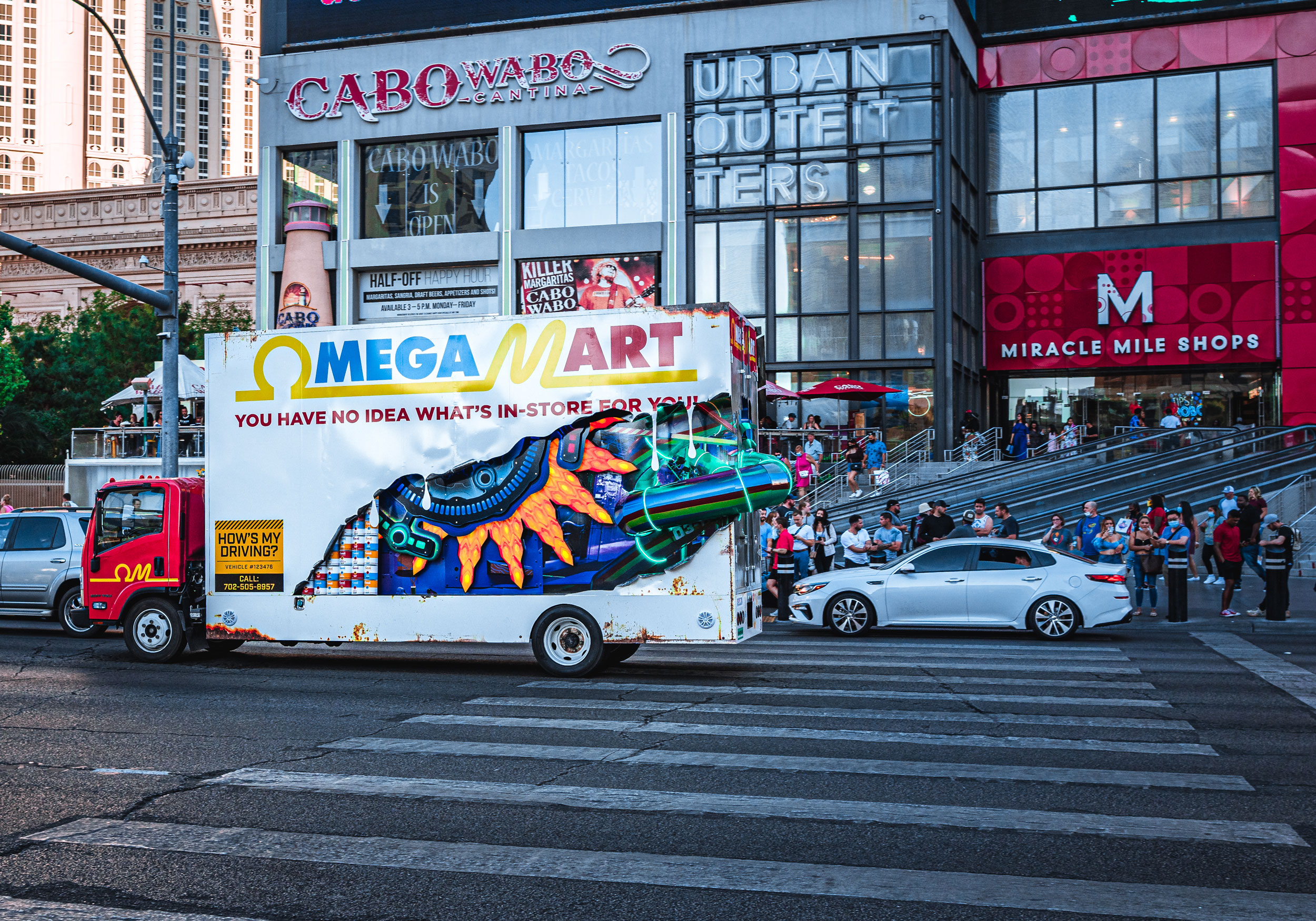 “When the creative minds at Meow Wolf reached out with this idea, we knew we’d have to deliver a design that was more exceptional than anything we’ve done before,” said Ivan Flores Merino, President & Creative Director of Company 8 Ad Group. “From our custom renderings, Kre8 Media took the reins to produce the build-out and delivered a first-of-its-kind mobile billboard with unique, custom embellishments on all four sides. We couldn’t be happier with the results of this collaboration with Meow Wolf and Kre8 Media.”

When it’s not making the jaws of tourists drop while coasting along The Strip or being shared on social media by viewing passerby, the iconic mobile billboard is making a splash at local community events. Its debut appearance was at the Life is Beautiful Music & Arts Festival in Downtown Las Vegas in September 2021, where it served as the backdrop for a weekend of product demonstrations and hilarious rap performances about grocery store culture.

“It was a pleasure to collaborate with the brilliant teams at Meow Wolf and Company 8 Ad Group. This custom build was definitely the largest challenge to date with all the key brand aspects and intricate details of Omega Mart. I couldn’t be prouder of our fabrication team and the outcome of this custom iconic mobile billboard. We are in the business of capturing attention and providing traffic to the venues or events, which I believe we have accomplished with this vibrant Omega Mart mobile billboard,” said Shaun Habibian, Owner of Kre8 Media Outdoor Advertising. “Research tells us engaging custom mobile billboard placement is the highest performing visual asset on the Strip and when we have the opportunity to collaborate, manufacture and operate a 3-D interactive piece of art, the business results increase dramatically.”

Featuring awe-inspiring work from international and local artists, Meow Wolf’s Omega Mart sends participants of all ages on a journey through surreal worlds, immersive storytelling, and playful nuggets of the imagination where they can discover secret portals, play and explore among unexpected landscapes, or simply soak up the innovative art as they venture beyond an extraordinary supermarket into parts unknown. Located inside of AREA15 in Las Vegas, Meow Wolf’s Omega Mart is now open daily from 10 a.m. to midnight.

Recognized in Fast Company‘s 2022 and 2020 list of the World’s Most Innovative Companies, Meow Wolf is a Santa Fe-based arts and entertainment company that creates immersive, interactive experiences to transport audiences of all ages into fantastic realms of story and exploration.

Company 8 Ad Group is a creative agency with more than 15 years of experience producing award-winning campaigns in the out-of-home advertising industry. From strategy planning to project management and execution, we work hand-in-hand with partners and clients to ensure  successful campaigns.

Since 2012 Kre8 Media, led by Owner Shaun Habibian – has been serving the Las Vegas community and Las Vegas Strip corridor with a creative, solution based unique outdoor media company with years of proven success for our clients. The company’s fleet has been curated and developed offering more than 60+ mobile billboard displays, customized mobile build-outs and digital mobile billboards.