Just ‘HOLD ON’ —Out of Home Creative

by Melody Roberts, Founder and CEO, of Out of Home Creative

Out of Home Creative was commissioned in May 2019 by Benchmark Outdoor to design speculative artwork for a prospective client, Schlitterbahn water park. To enhance the sell, the billboard design was submitted in the IBOUSA/Soft Signs 3D creative contest with first-place awarded a complimentary 3D inflatable vinyl from Soft Signs 3D, an estimated $10,000 value.  OOH Today featured the story here⇒The IBOUSA 1st Annual OOH Creative Challenge Winners Are In

The concept won first place, but after it was presented to Schlitterbahn they put it on hold since Schlitterbahn was rebranding their Texas location with a new name Beach Park at Isla Blanca. During the hold period in the Summer, Kool Runnings, a water park in Jamaica, contacted me about using the spec design they saw online. I confirmed my original design was not going to be used by Schlitterbahn and was able to sell it to Kool Runnings (read about the project here).

In September, I was advised Schlitterbahn/Beach Park was ready to move forward, but they wanted to make some changes to the original concept. The client understood some additional manipulating had to be made and they were still interested in using most elements from their remake.

I was commissioned to design a new billboard, which was a bit of a challenge to recreate an alternative version they would hopefully like better than what they had seen initially. I also had to explain why some aspects of the client’s redesign would not be the best for OOH and why my redesign would be better.

For the redesign, the client had to have their URL because of the new name, and since the board is relatively low to the ground, I kept it on the left side so drivers could see it better. I explained for their name to be visible, the logo icon needed to be smaller to make the name larger. We could not keep the dangling legs on their photo because the 3D inflatable had to be; completely round, no more than 1 foot off the top and no more than 14 feet wide. I had to take off the dangling legs but try to give the illusion legs were still there. Because the client provided image was isolated, I was tasked to find a background image that appeared as if it were the original background with the current on either side of the inner tube simulating someone going fast to tie in with the slogan, “Hold On!”.

Thankfully, the client understood my OOH recommendations and approved my version over their remake of my original design. Eddy Carolan and his team at Soft Signs 3D made the production side almost effortless and I love how the overall design turned out. Thank you Benchmark Outdoor for giving me the opportunity to work on this fun project. 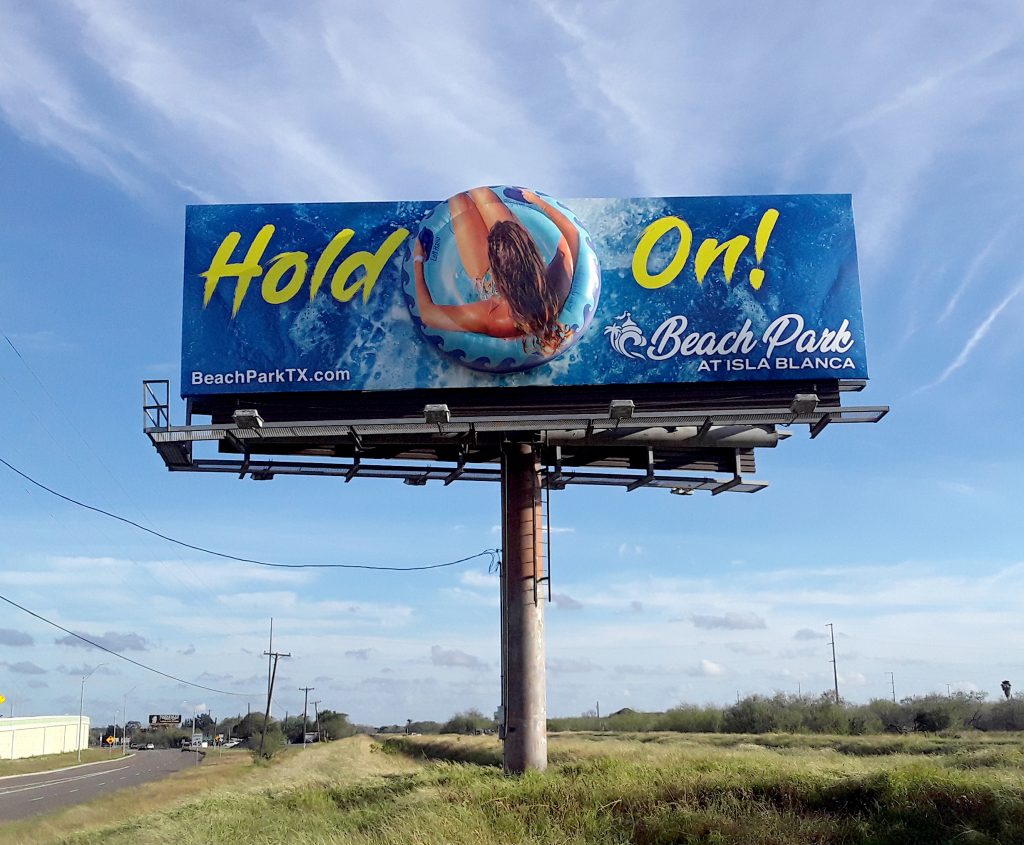 About Out of Home Creative: We are an outdoor advertising firm which designs billboards, digital campaigns, transit, and street furniture to any non-traditional out of home advertising. Based in Atlanta, Georgia we serve businesses, agencies, media buyers and out of home companies throughout North America. Melody Roberts is the Founder and CEO.  Contact melody@outofhomecreative.com or visit outofhomecreative.com