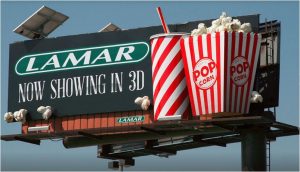 Recent History on Fairway:
GTCR with Adams Outdoor, bought Fairway’s approx 20,000 faces for around $550 million in Jan 2015. In less than 4 years, they sold a portion of the inventory, arguably the most valued of the inventory, to Lamar.

the lumber to steel ratio

We would love to know the lumber to steel ratio of the Lamar buy and the ratio of what is left of the currently unsold inventory. No one ever breaks this down for the public.

Below is a description of what appears to be left with Fairway and of course rumors swirl, as to the buyers for these properties.  More on that subject later in the week.

Chattanooga Division
Chattanooga, TN is the hub of a thriving region because it is located at the crossroads of the three states: Alabama, Georgia and Tennessee. Download a PDF map of this market.

Indiana Market
Fairway meets the promotional needs of businesses by delivering their messages to Indiana’s widely spread out audience.  Our inventory is distributed throughout forty-one counties reaching consumers inside and outside of the Indianapolis metropolitan area, covering key highways and thoroughfares in various nearby cities and towns. Download a PDF Map of this market.

Mid-Atlantic Division
The Mid-Atlantic division is a dynamic, vibrant division including Kentucky, West Virginia and Ohio.
Download a PDF map of this market.

North Central Division
The North Central division is located in Rochester, MN, 80 miles south of the Minneapolis-St. Paul area and 63 miles west of the Wisconsin border. Minnesota is a state with above average growth in economy, one of the lowest unemployment rates in the nation and a job growth that is 33% faster than the rest of the US. Download a PDF map of this market.

Southeast Division
The Southeast division is located in Valdosta, Georgia. Situated in this central location, Southeast offers coverage in the states of South Carolina, Georgia, Florida and Alabama. All markets provide great locations with high visibility on local roads and major highways and interstates. Download a PDF Map of this market.

Southwest Division
The Southwest division of Fairway represents coverage in four states — from the heartland states of Arkansas and Oklahoma to the Sunbelt state of Texas to the southern state of Louisiana. Our coverage specializes in rural bulletin inventory targeting both small town America and the suburbs of major metropolitan cities. In addition, we offer mass coverage in the north Texas markets of Wichita Falls, Sherman/Denison and Texarkana. Download a PDF Map of this market.