Dentsu boss Ashish Bhasin: Out of Home is on the way to recovery – but must try harder 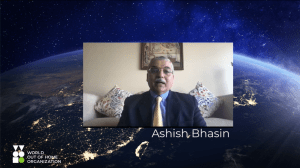 While Bhasin was bullish about the recovery in Asia, he was blunt about the issues still holding OOH back.  “So far the medium has not played to its fullest potential,” he said.

The two main issues for Bhasin that are holding OOH back in Asia (and, arguably, the world) are media owner consolidation (the lack of it) and audience measurement. On the latter, he said he was still having the same discussions he had 20 years ago. “You can’t be a proper industry if you can’t be measured.”

On consolidation, he said that OOH was finding moving forward difficult, particularly in digital, as the Asian market – China and India especially – was highly fragmented with a consequent lack of investment. Even standard poster sizes were difficult to determine in some markets, he said.

In part he blamed the major global players for this. “What they need to do is partner with national operators so we have a business that’s global and local. So far this hasn’t happened.  We’ve seen consolidation on the agency side but not among media owners. There’s too much squabbling.”

“Out of Home is bouncing back strongly from the pandemic but if it’s to compete effectively with digital in the long term then it needs to go more digital, too. That can only be achieved by consolidation and longer-term investment.”
– Ashish Bhasin

On everyone’s agenda at the moment is sustainability. Bhasin said Dentsu was “passionate” about sustainability, moving rapidly to zero carbon. But he acknowledged this was an issue for OOH media, too, with the need to move rapidly to more eco-friendly methods of printing traditional posters and cleaner energy for digital.

“Brands are demanding we do this,” he said. “It’s become a major issue but one where it’s also possible to gain a clear commercial advantage.”

A historic commercial advantage for OOH is creativity. “It’s been called the last unfair competitive advantage,” Bhasin says. “You can do a lot with a little. Just one hoarding on the Air India building on Nariman Point in Mumbai built their brand for decades. Just one billboard.”

“Creativity is OOH’s core strength. We should be doing much more to promote it.”

The World Out of Home Organization is the only global Out of Home Association, working to promote and improve the OOH industry on behalf of its members. Board members include the major International companies  – JCDecaux and Clear Channel – as well as Ströer, Pikasso, Global Outdoor, blowUP media, OUTFRONT Media from the US, oOh!Media from Australia and Selvel One from India as well as OOH associations, the OAAA in the US and Alooh from Latin America.

Membership is open to all companies who operate in the OOH sector and, as a non-profit Organization, funds are reinvested in industry issues such as research and the annual international congress. WOO is a member of EASA in Europe, as well as a founding member of ICAS, and actively works to help the membership with legislation issues within their own countries as well. It also aims to lobby for Out of Home advertising with authorities, international organizations, opinion formers and other elements of the communication media. More information is available at http://www.worldooh.org