BROOKINGS, S.D. –  Daktronics (NASDAQ-DAKT) of Brookings, South Dakota, has partnered with Lusail Boulevard and Qatari Diar to manufacture and install eight new LED displays along Lusail Commercial Boulevard in Doha, Qatar. The displays were installed along the main roadway leading to Lusail Stadium in the summer of 2023 and turned on at the beginning of September to bring light to advertisers and other public messaging.

“These new displays have been the talk of the town!” said Qatari Diar Representative and Chief Project Delivery Officer Fahad Abdullatif Al-Jahrami. “Bringing 3D, forced perspective into the city has been very attractive and brings more audiences to this area to enjoy the views, shops and more.”

Ahead of worldwide events being held at the stadium, these displays were activated to engage the hundreds of thousands of people passing by as they head to and from matches, celebrating their victories in this area of the city. 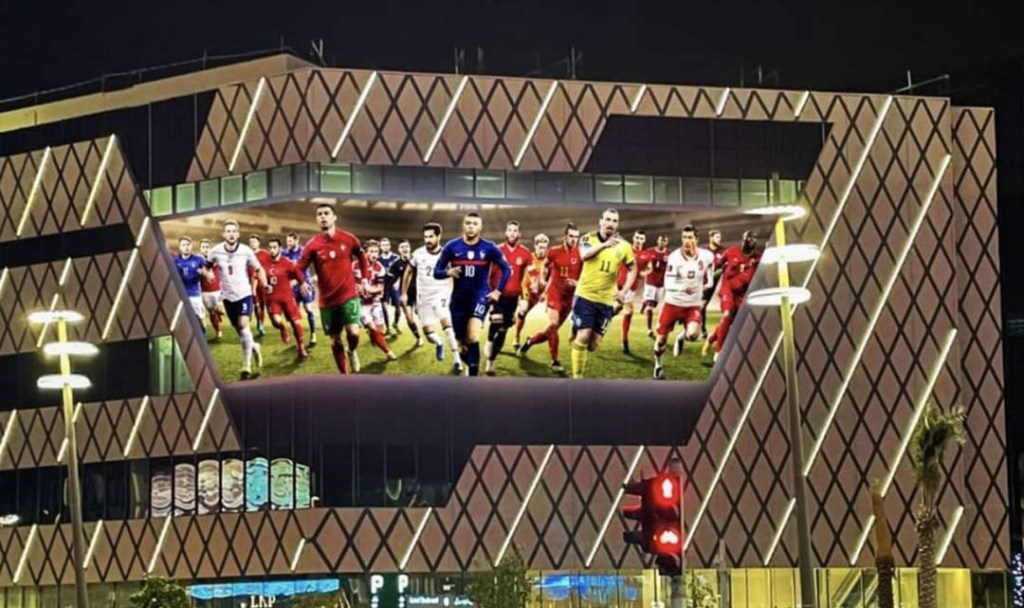 These four displays can each show one large image and can coordinate to show the same content or each can show individual messaging. They each feature 10-millimeter pixel spacing and incorporate industry-leading environmental protection to ensure they operate as expected in the outdoors of Doha while also delivering excellent image clarity and contrast to all messaging.

The displays were designed to enhance the beauty of the buildings and their architecture with dedicated space for the technology to bring light to the exterior. This includes showing live feeds of events in the nearby stadium and entertaining audiences while they are drawn in for each event.

Similarly, four freeform LED displays were installed along the exterior of the buildings to bring them to life with colors, animations and advertising messages. Each of these four displays features 25-millimeter pixel spacings along LED stick elements and covers a combined total of 1,754 square meters. These displays create full video capability when viewed from the outside of the building and are visually transparent from the backside forming a Venetian blind effect while allowing light to pass through the display to the inside of the buildings.

“The new 3D displays have added new features to Lusail Boulevard that are very attractive and enticing which adds to the excitement and vibrant atmosphere of the boulevard,” added Daktronics Regional Manager Ahmad Dahmash. “The freeform transparent technology allowed us to meet requirements by having a great digital display to be synergized with the rest of the displays without blocking the daylight in the offices and allowing for visibility to the outside.”

Together, these eight displays light up Lusail Commercial Boulevard in a way that captures attention and creates an enticing atmosphere for the location.

About Daktronics
Daktronics helps its customers to impact their audiences throughout the world with large-format LED video displays, message displays, scoreboards, digital billboards, audio systems and control systems in sport, business and transportation applications. Founded in 1968 as a USA-based manufacturing company, Daktronics has grown into the world leader in audiovisual systems and implementation with offices around the globe. Discover more at www.daktronics.com.

Daktronics is an advertiser with OOH Today