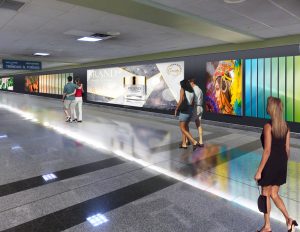 This competitive win for the Americas-based airports business of Clear Channel Outdoor Holdings, Inc. marks the fifth major contract announced in 2019 and complements 15 wins in 2018 and 80 wins over the last 5 years. CCA has nearly doubled annual airport advertising revenue at POS and TAB since first entering the market in 2012.

CCA’s cutting-edge advertising program provides revenue generating offerings through signature, high-impact digital and large format assets with energy conservation in mind. This new media program will implement a minimalist approach at both airports to ensure a clean look that creates an inviting statement to welcome travelers.

“We found the Return on Investment (218%) for the vehicle displayed in the airport a huge success. Not only by the measurement of sales, but by the traffic it has driven to our showroom. Both units we displayed in the airport were sold to customers choosing to purchase showroom vehicles as a result of the brand’s presence in the displays.” said Scott Phillips, sales manager, Trinidad and Tobago, Trafalgar Motors.

High-end purchases like these come as no surprise to advertisers as Trinidad and Tobago are among the wealthiest countries in the region. Nearly three million passengers travel through POS/TAB annually. It serves as the primary hub for Caribbean Airlines and offers 29 international destinations including; New York, London, Miami, Fort Lauderdale, Philadelphia, Fort Lauderdale, Orlando, San Juan, Houston, New Orleans and more. Based in southwest Tobago, TAB operates five international airlines with one million annual passengers. The airport will undergo an expansion project within the next three years, increasing its direct flights to the island from New York (JFK), Newark, Houston, Miami, Fort Lauderdale and Orlando.

Hayden Newton, General Manager of Airports Authority of Trinidad and Tobago (“the Authority”) stated, “Clear Channel Airports understands the Authority’s strategic direction and objectives. Their work has helped us realize our vision to lead the region in diverse and innovative aviation business. We’re happy for the continued partnership, as we aim to deliver even higher standards of service, improve airport aesthetics and enhance the customer experience, while meeting non-aeronautical revenue earning goals.”

Dedicated to airport advertising for more than 45 years, Clear Channel Airports is the premier innovator of contemporary display concepts. The Company, a brand division of Clear Channel Outdoor Americas, currently operates more than 260 airport programs across the globe and has a presence in 28 of the top 50 U.S. markets with major airports. www.clearchannelairports.com

OOH TODAY believes all voices, not just the loudest, must be heard 3400 posts 506 comments