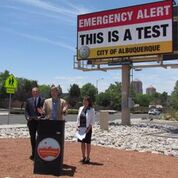 This is a great partnership between Out of Home Owner and Municipality which provides rich rewards for both parties going forward.  Congrats CCO Albuquerque! Thank you for sharing!

A press conference was held Thursday June 28th, by Clear Channel Outdoor and the Mayor of Albuquerque on June 28th in Albuquerque, New Mexico.

The conference announced the partnership between Clear Channel and the city of Albuquerque which will allow the city to leverage the digital billboard capabilities as a part of the emergency management plan that is in place.

New York, New York – Mayor Tim Keller and Clear Channel Outdoor Americas , a subsidiary of iHeartMedia Inc., today announced that the City of Albuquerque has chosen Clear Channel Outdoor’s digital billboard network to display real-time emergency alerts throughout the metropolitan area. The new partnership will allow the City of Albuquerque to leverage the immediate power of digital out of home (DOOH) media to communicate vital safety and disaster preparedness information to protect citizens and visitors during emergency situations.

In a press conference held earlier today in front of CCOA’s digital billboard at Lomas Blvd. and High Street, Albuquerque Mayor Tim Keller joined city officials and Brenda Begley, Vice President of Sales for Albuquerque, for Clear Channel Outdoor Americas, to officially announce the new agreement. The collaboration enables the City of Albuquerque to tap Clear Channel Outdoor’s digital network, which includes 44 digital billboards that reach nearly 98.5 percent of adults weekly across the City of Albuquerque, to alert the community about potential threats that may arise from an emergency or disaster.

“We are proud to partner with the City of Albuquerque to enable the real-time dissemination of critical information via our digital billboards to the local community during emergency situations,” said Brenda Begley. “Our digital billboards serve as one of the most powerful broadcast mediums available to transmit critical information during crises, and Clear Channel Outdoor is committed to partnering with communities around the country to enhance safety and improve lives.”

“As we work to improve public safety in our city, preparation is key,” stated Mayor Tim Keller. “This partnership gives us a way to alert city residents of critical information during a major emergency. It has made a difference helping keep people safe in other cities, and now we can use it right here in Albuquerque.”

Clear Channel Outdoor and the city of Albuquerque are long-term community partners, having worked together on a number of public safety awareness campaigns including calling attention to the plight of missing children in the Albuquerque metropolitan area.

The city joins a growing number of state and local emergency agencies across the U.S., including; Boston, Des Moines, Florida, Maryland and Minneapolis/St. Paul that have tapped into the un-skippable power of Clear Channel’s digital outdoor media to help communicate time sensitive safety messages.

Are Using Cameras on Billboards to Measure Data and Demographics Privacy Violations?