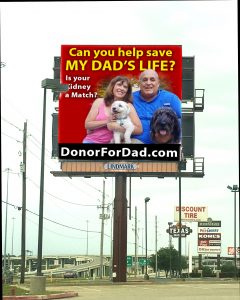 Publisher’s note: Victoria Verhey, Sales Manager for Lindmark Outdoor Media sent us this amazing story of how a billboard prompted one man to attempt to save another’s life and in the journey to help, discovers his life is in grave danger. A very unique story responding to a plea from a billboard. We have included the email in its entirety below. Please give it your time.

My name is Victoria Verhey with Lindmark Outdoor Advertising.

I am a industry vet of 21+ years, and believe in the Power of OOH.  We posted a PSA creative for one of our vendors Formetco’ s VP, Todd Heller.

As you probably know, Todd needed a Kidney so his family created the billboards and sent out to OOH vendors across the country.

Lindmark, along with tons of other OOH companies posted billboards around the country for Todd, to help Todd find a kidney.

Todd and his wife Kathy, have been longtime OOH believers and knew it could work and save Todd’s life.

By chance, Lindmark’s billboard is the billboard that a amazing young man, Daniel Stanley passed by in Texarkana.

Out of the Donor for Dad story, WE believe more than just Todd’s life has been saved.  Todd got a kidney but it also saved Daniel Stanley’s life in the process.

And that is where this new story begins.

Here is the story:

A young man by the name of Daniel Stanley found us on a billboard in Texarkana, Texas that Lindmark Outdoor had posted.  Daniel lives a couple of hours from there and just caught the tail end of the donor for dad ad as he passed by on the way home from a trip to see family for Thanksgiving.  He was not able to get the donor for dad info and figured we were listed at a hospital in Texas.  He made calls and searched for us for over a month.   He said he was drawn by the picture on the billboard and felt a calling from God to find us and to give Todd one of his kidney’s.  One day he called me at Lindmark and made such a plea to me to help connect him with Todd, and of course I did.

Daniel is a 21-year-old married farmer with 3 beautiful children. Daniel and his Aunt, came to Atlanta for a day of testing. After each test he called us happy that he had been passing each test.  He was very excited as he was a direct match for Todd.  The last test was a cat scan of Daniels kidneys…unfortunately, which he did not pass.  We were all devastated as Daniel got diagnosed with stage 3 kidney cancer which the hospital said came from somewhere else in his body. He went to MD Anderson for 7 days to get tested and find out more about what is going on and what his treatment will be.  They found that Daniel has Small Cell Carcinoma throughout his lung that has spread to his Colon and Kidneys.  He will have to have 12 treatments of chemo, surgery to remove the kidney, and then 6 more chemo treatments.  Daniel is only 21 year old, and positive about his diagnosis.  He knows he has a long road ahead of him, but it ready to fight for his life for his family and children.  He will have to have 3 surgeries and many more chemo treatments after each surgery.

Daniel is an extraordinary young man and we have made a lifelong friend and will be following his progress and of course, praying for him.

By Daniel seeing this billboard and trying to save Todd’s life we believe that the billboard will save Daniels life!

Daniel is a independent farmer and unfortunately the insurance he had would not cover anything for the cancer treatments.  So now he is uninsured. a year.

DonateToDaniel.com is the website is to help Daniel. I have attached a copy of the billboards that Lindmark will be posted today on their locations and hope that you that other OOH vendors to post on their locations across the country to help get the word out and utilize the power of Outdoor to now help Daniel too.

The News story will also be airing on News tonight at 10 pm on KETK / FOX 51 channel and it can be viewed by their app if you would like to watch it.  Tomorrow it will be push out nationally to other stations in the country.

Thank you for your help and consideration.

Out of this story, Todd has found a kidney and Daniel’s life can be saved too.  The power of a billboard is great and so are the people of in the Outdoor Industry.

TOMI, TOMI, TOMI Can You Feel Me Near You?