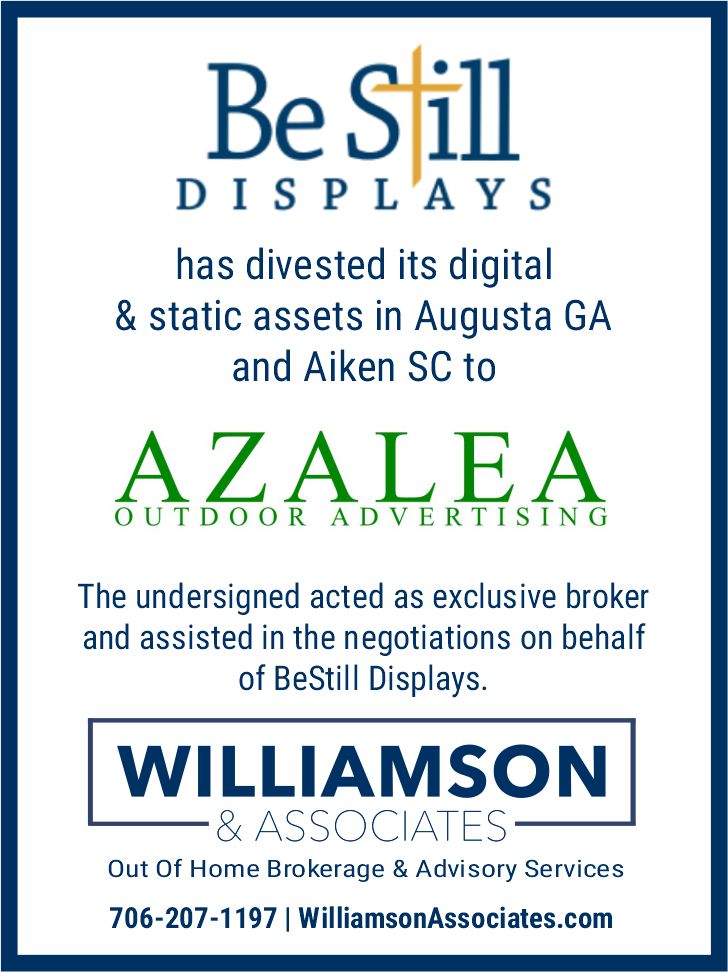 Azalea Outdoor, a subsidiary of Azalea Investments, LLC of Augusta, is pleased to announce that the company has acquired 22 digital, 20 static and 23 mini-LED faces in Augusta, GA and Aiken, SC from BeStill Displays, LLC. Williamson & Associates represented BeStill Displays in the transaction.

Azalea Outdoor is owned by the Morris family, who are not strangers to the out-of-home advertising industry, having previously owned Fairway Outdoor. The purchase of BeStill Displays significantly expands Azalea’s footprint in the Augusta and Aiken markets. These assets, combined with the company’s existing locations, create the mass to provide greater coverage and more opportunities for their clients.

Speaking for the owners of Azalea Investments, Will Morris said, “We are extremely delighted that Azalea had this opportunity to become involved with BeStill. This acquisition allows us to better serve our customers and positions Azalea Outdoor for continued growth.”

Chris Withers, President and owner of BeStill Displays, will stay on as President of Azalea Outdoor. Withers has a long history in the industry having started his career in 1998 with Lamar and later with Bressler, Prodigy, and Insite MediaCom. He formed BeStill Displays in 2009 and has developed many premier static and digital assets in the Augusta market.

“We are thrilled to have someone with Chris’ leadership and expertise join our team.  We believe the outdoor advertising industry has a bright future, and we plan to continue growing this business,” said Derek May, president of Azalea Investments.

“I could not have picked a better company to merge with BeStill Displays than Azalea Outdoor.  I have known Derek and the Morris family for years.  Due to their passion, integrity, and work ethic, I knew this would be a fantastic marriage,” said Withers.

Williamson & Associates President & CEO, Marty Williamson said “It was our pleasure to assist with this transaction. Having known Chris and Derek for a number of years, it was clear early on that this union would create a fantastic opportunity for all involved.  For Azalea, it’s the jet fuel they need to launch to the next level!  Chris will be able to continue doing what he has a passion for – running a great billboard company. Congratulations to all!”