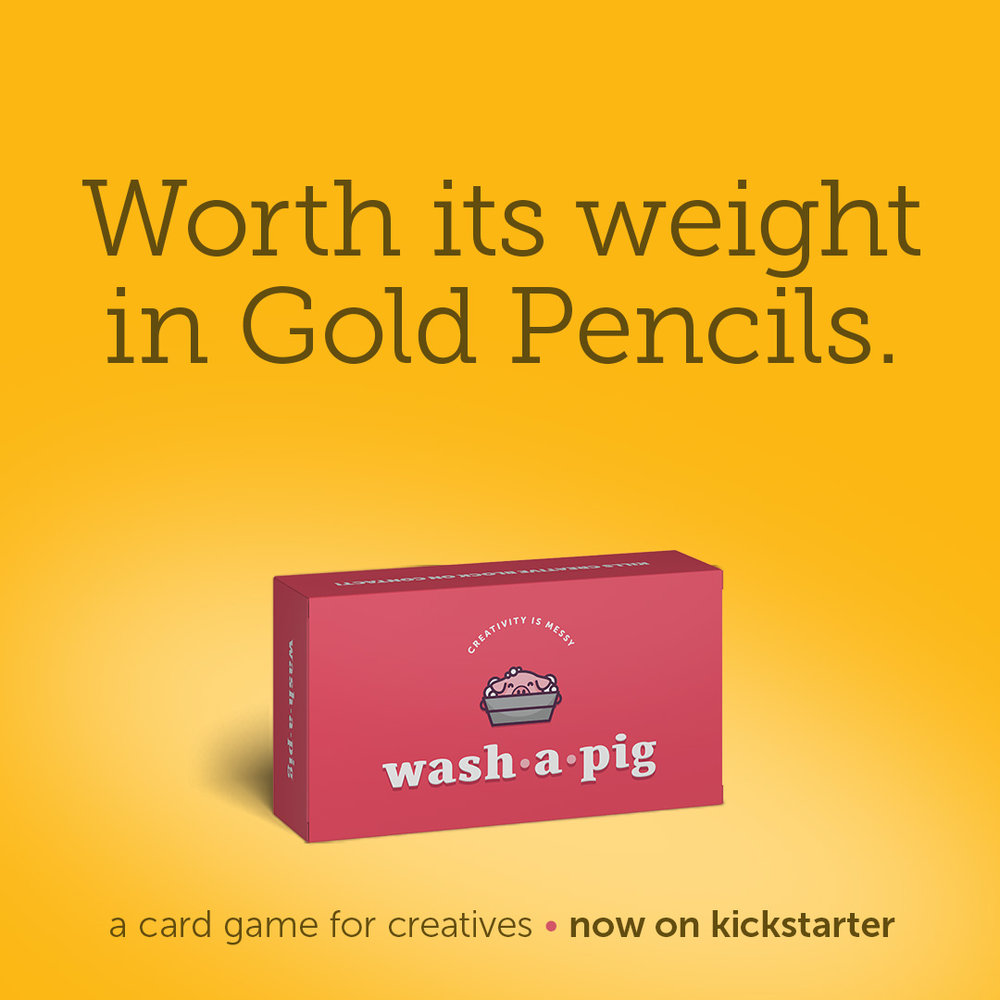 A CARD GAME FOR CREATIVES IS MAKING HEADLINES

Just launched on Kickstarter, Wash-a-Pig is a creative block killer.

CHICAGO – It’s been said that creativity is a muscle. With regular exercise, it’s stronger and more efficient. That’s the goal of Wash-a-Pig, a card game for advertising and marketing creatives recently launched on Kickstarter. Studies show that creativity is more of a skill than a talent. With practice, one can summon creativity more easily when needed. “I developed Wash-a-Pig as a way to teach and practice writing headlines with my creative teams,” says Todd Turner, 15-year advertising veteran and creator of Wash-a-Pig. “Whenever we played, it didn’t just make us better writers. It also sparked more creativity in whatever task or activity we did next.

So while you might be writing headlines for fake ads, the game play puts you in a more open and inspired mindset.”With Wash-a-Pig, players are given a combination of WHAT, WHO, or HOW cards to write fictitious ad headlines. You might get a card prompting you to write a headline for a hair salon and another card to write it like a poem. Write a headline for a plumber speaking to computer programmers. Write a headline for an energy drink using onomatopoeia. With 54 WHAT cards, 36 WHO cards, and 36 HOW cards, there are 3,888 possible combinations of writing prompts.“I’ve been writing the prompts on index cards for over 10 years and always wanted a professionally-produced deck of these cards,” says Turner. “Kickstarter enables me to crowdsource production costs and grow the fanbase simultaneously.” Backers can get the core deck of the game for a pledge of $20.

When the $2,000 funding goal is reached, Turner will announce stretch goals for even more funding. When these stretch goals are reached, backers get additional rewards such as more cards added to the game.Turner adds, “Creative block is an aggravating problem in a creative’s workflow. Some days you’re in the zone. Some days you’re not. I hope Wash-a-Pig helps creatives stay in the zone more often and have buckets of fun in the process.”

The Wash-a-Pig Kickstarter campaign runs through May 30th. Anyone who wants to tap into their creative potential can pre-order on Kickstarter here:http://kck.st/2Wsanys