Jackson Hole Tourism, new campaign developed by Minneapolis based, Colle McVoy. Kate Sollitt, executive director of the Jackson Hole Travel and Tourism Board, said   “Colle McVoy really kind of blew everybody out of the water.”  The group was immediately sold on the concept’s guts and versatility. 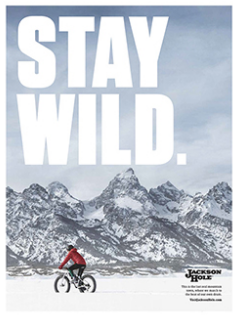 #OOH Murals in New York and San Francisco, and an experiential Super Bowl installation are part of the campaign.