While the targeting in modern advertising is becoming highly sophisticated, billboard ads could still be massively powerful. Thanks to the advancement in technology and innovative thinking, digital billboards that use optical illusions to show 3 dimensional images are keeping the long-standing media up-to-date and even making them more immersive and engaging than ever before.

In 2022, the Year of the Tiger, Samsung Electronics launched a striking out-of-home campaign using a giant 3D billboard that grabbed a worldwide attention.

Just before the Galaxy Unpacked 2022, one of the most anticipated tech events of the year where Samsung reveals its latest innovations, the global activation took place at landmarks of the world’s most vibrant cities including New York, London, Dubai, Kuala Lumpur, Beijing, Shanghai, Guangzhou, and Seoul to build up anticipation towards the new Galaxy S22 series.

Titled “Tiger in the City” the campaign has all the characteristics that a successful out-of-home campaign should have – showing something that people would want to share in a way that would stop people in their tracks, leaving a strong impression in the end. 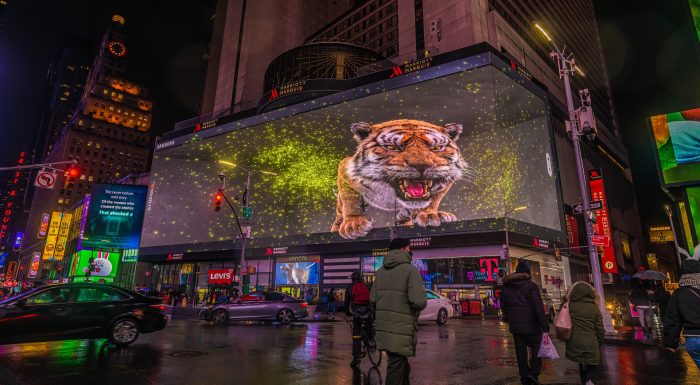 The 30-second show brings a shockingly realistic tiger to life. The giant tiger moves dynamically, followed by the same copy “Ready to break the rules?” used in Samsung’s official trailer film released just two weeks before the activation. It ends with the tiger vividly jumping out of the supersize screen as it shatters the glass.

Simple, yet intuitive, the campaign integrates key aspects of the Galaxy brand and innovations of the new product series. Tiger, symbolizing courage and fearlessness, takes a huge leap conveying the Galaxy brand’s bold move over the past decades reshaping the world through mobile innovations. Tiger is also known for its powerful night vision, a feature that connects to the power of new Galaxy series’ advanced Nightography capabilities.

The results were phenomenal. Press all over the world covered the campaign, amplifying its reach. In just two days, the campaign generated 400+ media coverages globally, 2.9k mentions in the U.S. alone, and $114K worth of earned media value in UAE.

Not only was it a successful out-of-home campaign, but also a digital touchpoint sensation. Samsung’s social handles featured digital film and social assets using the billboard ad, extending the campaign’s presence to the digital space. It induced 283% more views on YouTube, and 17% more engagement on Instagram than average. Moreover, influencer activations via Samsung’s Instagram channels using a special AR filter led to more organic shares and engagement.

About Cheil Worldwide
Cheil Worldwide is the leading business-connected agency operating in 45 countries worldwide with around 6,500 employees. We specialize in performance-driven marketing across three core offerings – brand communications, experiential, and commerce. With our focus on enhancing business performance of our clients and brand experience of consumers, we create connected experiences that matter by forging connections between all the marketing silos, putting together creativity, data, tech, and retail.