Innovative products call for an out-of-the-box approach. Therefore, in the newest campaign promoting Galaxy S22 smartphones, Samsung will rely on a 3D Digital Out of Home commercial that will be used in Poland for the very first time. The new format will debuted this week on large screens on the Marriott Hotel at Jerozolimskie Avenue in Warsaw. 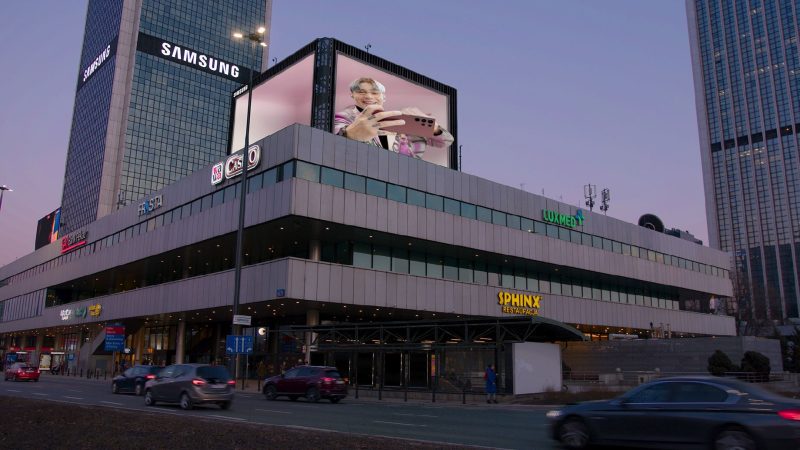 “From the beginning, our main goal was to bring this unique and innovative solution to Poland. We like to surprise, and we do believe that our consumers always crave new, fresh and engaging approaches. That’s what motivates us. 3D DOOH has also allowed us to introduce, in a highly unique manner, the newest member of the Galaxy family – Żabson. The Galaxy S22 series and Żabson are a perfect match,” said Magdalena Sielachowicz – Nowakowska, Head of Marketing, Samsung Electronics Poland.

The unique 3D Digital Out of Home creation promoting the latest series of Galaxy S22 smartphones and featuring Żabson was produced in cooperation with the VMLY&R creative agency, Screen Network and Platige Image. A large-format display operated by Screen Network (with the total area of 280 m2), located in downtown Warsaw, has been used. The display is the only curved 3D screen in Poland that allows to achieve the anamorphic 3D effect. When watched from a specific location, it offers the viewer the illusion of a three-dimensional depth achieved on a flat surface.

“A creation of this type allows us to engage viewers on an unprecedented scale, additionally boosting the reach of the campaign due to its viral character,” adds Agnieszka Godlewska, CEO, Screen Network.

Achieving the illusion of 3-dimensionality on a medium used in a city environment was quite a challenge, both conceptually and technically. The said effect may only be encountered when the content is viewed from a specific angle, as the viewer needs to have the entire screen within their sight.

“We needed to precisely pinpoint the location, and then design all elements visible on the screen to ensure that they are aligned with the perspective grid and form an extension of the building’s architectural elements. This was the key for achieving the depth effect,” underlines Marek Gajowski, Head of CG, Platige Image. Żabson and the Galaxy S22 series literally reach out of the screen frames, guaranteeing a personalized and interactive experience.

The latest 3D Digital Out of Home commercial by Samsung will be airing until the end of April, in Warsaw, at the corner screen on the Marriott hotel’s building on Jerozolimskie Avenue, and on 2D screens with an enhanced depth effect that are located in Arkadia and Galeria Mokotów shopping malls, as well as in the Unii Lubelskiej square. The campaign will be also launched in the digital media.

“Copying the 3D creation effect, we successfully achieved on the outdoor screen, to social media was quite a challenge. The illusion of 3-dimensionality, presented in an interactive form, attracts the attention of the digital consumer who is used to classic social formats,” stresses Patrycja Rusnak, Social Media & Gaming Director,  VMLY&R.